“What ACN is doing for the Lebanese is truly great!”, says Patriarch

The Patriarch of the largest Christian Church in Lebanon expresses his most heartfelt gratitude to all the benefactors who make the work of Aid to the Church in Need (ACN) in this country possible.

During a visit of representatives from the pontifical charity, including directors of several national offices, aimed at expressing solidarity and proximity to the local Christian community, Patriarch Bechara al-Rahi, of the Maronite Church, made a point of thanking the organisation, and specifically all its benefactors, for the support they have been giving to the Lebanese Christian population.

“I would like to tell your benefactors that they are supporting Lebanon, and the Lebanese population”, he said to the delegation, which over a period of a few days visited several projects funded by ACN. 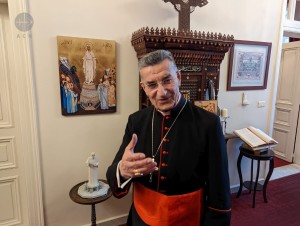 “You have seen the situation they are in. The Lebanese population is not what it once was. The Lebanese used to live with dignity, they were not dependent on anybody. The fact is that our politicians made the population poor, beggars. We are haemorrhaging people. Every day we lose thousands of our best engineers, our best doctors, our best teachers, because the loss of value of the Lebanese pound to the dollar destroyed the value of salaries.”

“Just imagine, eighteen months ago one dollar used to be worth 1,500 Lebanese Pounds, and now it is around 25,000. Salaries lost their value, and everybody became poor. All those who could, emigrated”, explained Cardinal Patriarch Rahi.

Over decades, despite its small size, Lebanon has become home to a large number of refugees, which is putting an increasingly large strain on the state. “Our population never closed its borders. In 1948 we welcomed the Palestinian refugees. At the time our patriarch sent a letter to all the convents, schools and universities that belonged to the Maronite Church, to open their doors to them, because they were our brothers in need. They are still around half a million. We have a further 1.5 million Syrian refugees, as well, so we are looking after two million refugees”.

With no end in sight to the financial and political crisis gripping the country, many aspects of society are dependent on outside help. Aid to the Church in Need runs many projects in Lebanon, which continues to be the country with the highest proportion of Christians in the Middle East. These projects include supporting religious congregations in their pastoral and social work, providing food packages for particularly vulnerable families and giving financial support to teachers in Christian schools, as well as paying tuition fees for some of the poorer students.

“I want to highlight what you and your benefactors are doing. It is truly great! True, it doesn’t solve Lebanon’s problems. The economic problem is something that the state is responsible for. But the benefactors practice solidarity, fraternity, communion. And the Lebanese, I assure you, are very grateful to you all. Grateful for your closeness, and for everything you are doing.”

“From the bottom of my heart, in the name of all Lebanese, thank you!”, concludes the Patriarch.