Bishop Mario Moronta of San Cristóbal appealed to the international community not to let Venezuela down. “May the solidarity not diminish! I appeal in particular to the European countries and the US, which are now thinking about sanctions – I believe one of the first sanctions they should impose should be that no weapons are sold. Neither to the government nor to violent groups in any direction, as it is not only in Venezuela, but throughout Latin America. The solidarity and concern of the European and other countries should be more the people of Venezuela and not so much of economic interests.”

He added that Venezuela is an important oil supplier. At the moment, this is clearly stifling the zeal of the US government of Donald Trump to take real drastic measures against Maduro’s regime. 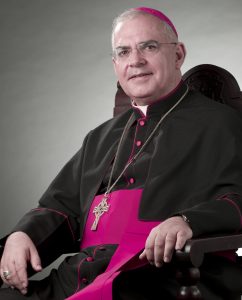 The Bishop also explicitly reminds Europe: “I know that there are many European countries that do not care about people, not the political situation in Venezuela but only the economic and political interests they have here. My appeal to them is: do not sell weapons. Neither to the government nor the armed groups. Neither in Venezuela nor anywhere in the world! “

Referring to a recent statement of solidarity from the Pope, Bishop Moronta said:

“This statement of the Holy Father and the Holy See is an important support not only for us bishops, but also for many leaders of other religious communities in Venezuela who are all very concerned about the situation in the country. The Pope calls very clearly and urgently for an end to all forms of violence. This statement is now spreading throughout the country, and I believe it will have a good response from the people. Hopefully, this will also apply to the government and the political leaders of the opposition!”

Bishop Moronta urged the army – so far the most important supporter of the regime – to no longer to place itself in the service of “a party, an ideology”. “They have sworn to the Constitution that they would defend the people and democracy; They can not now give themselves up for a dictatorial democracy – I do not know whether it can be called that,” he said.

Some military officials had responded to his appeal by saying they had to think about it. “But others have completely committed themselves to obedience to the President. The National Guard, the strongest force against demonstrators and the people, should listen to the message. We call on the security forces to turn around and stand by those on the side of human rights! The army should think of God and act in fear of God, that is what we ask. “

Bishop Moronta believes the greatest threat to Venezuela is not civil war, but the fear of popular uprisings instigated by hunger. Rather, he sees “the danger of clashes between individual groups”, or that “some groups can arm themselves”.

The situation in Venezuela is not only a political crisis but also an economic crisis. “From my point of view, the most dangerous thing at the moment is the exhaustion of people, the people who suffer from hunger. Many people are starving, they have no food, no medication, no security. That is why the time may come when a social explosion will take place and then we will have a chaotic situation,” he says.

According to Bishop Moronta, the public mood is likely to erupt into anger and violence especially among young people who “grew up in this revolutionary phase.” He explains “some leave the country, others want to fight and call for violence – it is the desolation of their situation and the lack of future prospects, which is affecting the youths.”

Unfortunately many people are leaving the country. “Here on the border every day we see many families who are leaving for Colombia. This is not just a rejection of the political regime but above all in response to this situation of neglect that people are experiencing at the moment,” says Moronta.

The Bishop of San Cristóbal thanked the neighbors in Colombia for the good reception of migrants from Venezuela. He is in contact with the bishop of the Colombian diocese on the other side of the border almost every day, and he knows that everything is being done for the arriving refugees.