Seventy years ago, Aid to the Church in Need (ACN) initiated the campaign “A vehicle for God”. So-called “rucksack priests” were given vehicles so that they could dispense pastoral care to the displaced Catholics of the German diaspora after World War II. 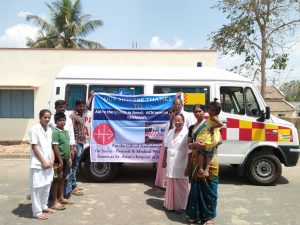 INDIA / MYSORE 18/00240
Vehicle (ambulance) for socio-pastoral and medical work of SSA Sisters at St. Anne’s Hospital at Jettihundi and surroundings – SSA – Bangalore Province
Photo: Sisters and patients in front of the ambulance with a thank you banner
Small file quality available

“I give religious instruction at seven schools and regularly celebrate Holy Mass in three centrally located towns. Each week I travel 215 kilometres by bicycle, often in the rain and snow, along streets and paths that are covered with ice or slush in the winter, with mud in the spring and with loose sand in the summer.” Letters of complaint such as this one were what inspired Father Werenfried van Straaten to provide priests in post-war Germany with a set of wheels.

As a result of the horrors of war and the division of the former German eastern provinces, more than 15 million people were forced to leave their homes. More than half of the displaced persons were Catholic.

Many of the East German Catholics were resettled in regions that were almost exclusively Protestant and had not seen a Catholic church in centuries. About 3000 priest, “heroes of pastoral care”, provided spiritual comfort and administered the sacraments in these regions. As they themselves had also been displaced from their former homes, they travelled on foot from one place to another, carrying the liturgical vessels for Holy Mass with them in their rucksacks. 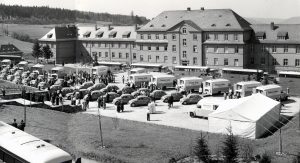 1951-Launch of chapel truck campaign 35 second-hand busses are converted into mobile chapels. They will be used to support the pastoral ministry among the displaced German people, and also for the distribution of the material aid collected for them.

The priests looked like vagrants with their threadbare clothing and mended rucksacks. They were on the go for hours each day, covering hundreds of kilometres. They braved wind and weather, usually on foot or – the more fortunate ones – by bicycle. Severely weakened from the hardships borne during their own expulsion, many of the priests died.

Not long after the war had ended, in 1947, Father Werenfried was quick to recognise the material and spiritual needs of those who had been displaced. The native Dutchman and Premonstratensian from Tongerlo Abbey in Belgium was a visionary of charity. He trusted in God, in the good in people and in the power of forgiveness, even between those who had once been bitter wartime enemies. He worked tirelessly, at first collecting clothing and food in Belgium and the Netherlands for the people displaced.

Beginning in 1949, the distressing reports from the rucksack priests prompted Father Werenfried to extend his efforts and beg for “vehicles for God”. With success. In only two months he was able to collect enough money to purchase 120 cars! Recognising the signs of the times, he planned the next campaigns with bold entrepreneurial spirit: “We have to head east with convoys of aid. We have to man trucks with priests and fill them to bursting with gifts of charity.”

When Father Werenfried preached about “convoys of aid”, that is exactly what he meant. Seventy automobiles and 14 so-called “chapel trucks” were blessed on 22 April 1952 in Königstein im Taunus, the most important religious centre for displaced Catholics and today the international headquarters of ACN. The chapel trucks were semi-trailer trucks that had been converted into mobile chapels. 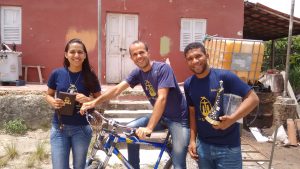 From that day on for the next two decades, the chapel trucks from Aid to the Eastern Priests were on the road with a team of one German and one foreign missionary and a driver. The Church literally came to the villages to give displaced persons the courage to go on living. One driver recalled, “We drove a behemoth of a truck”. He felt like a “lion tamer” at the wheel. After all, each chapel truck was 14 metres long, two metres wide, three metres high and weighed five tons. One of the side walls could be folded out to reveal the altar. The entrance to the confessional was on the other side. Accommodations for the two priests had been set up in the rear of the truck, while the driver slept up front in the cab.

The large chapel trucks headed out for the last time in 1970. The trucks had stopped in hundreds of places in Germany and even some places abroad. The mobile chapels became the spiritual havens for countless displaced persons during the difficult post-war period.

This is how the motorisation of pastoral work became one of the key focuses of Father Werenfried’s organisation, which is called Aid to the Church in Need today and has been a pontifical foundation since 2011. This is still true today.

In many countries worldwide, the distances between villages and towns are much larger than in Germany. A single parish can be larger than an entire diocese there. To ensure that God’s workers do not “become stranded” on the way to Holy Mass or to visit a sick or dying person, ACN provides funding for vehicles appropriate to the local conditions – all-terrain vehicles, motorcycles, bicycles and sometimes even boats.