With deep dismay, the pontifical foundation Aid to the Church in Need (ACN) has learned of the detention of two priests who were carrying out their ministry in the since February 2022 Russian-occupied port city of Berdiansk, in south-eastern Ukraine.

The Redemptorist priests arrested by the Russian militia have been providing pastoral care to both Greek Catholic and Roman Catholic parishes and are among the few who still remained in the Russian-occupied territories. 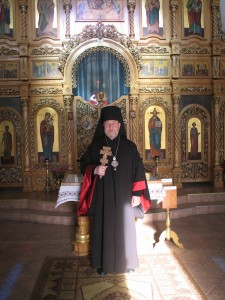 Bishop Menok inside the episcopal church in Donetsk, where the curia is going to be built

According to the official statement sent to ACN, signed by Bishop Stepan Meniok of the Donetsk Exarchate of the Ukrainian Greek Catholic Church, the detention was “groundless and unlawful”.

Father Ivan Levitskyi C.SS.R., parish priest of the Church of the Nativity of the Virgin Mary in the city of Berdiansk, and Father Bohdan Heleta C.SS.R., chaplain of the same church, have been imprisoned in a pre-trial detention centre in Berdiansk by the Russian administration and stand accused of preparing a terrorist act.

The statement sent to ACN denounces the fabricated accusation of possession of weapons and explosives by the clerics, saying that the whole stunt has been arranged for propagandistic reasons.

“The priests have been in priestly ministry for more than three years and are carrying out their legitimate pastoral activities in the local parish, proclaiming the word of peace for every person” Bishop Meniok explains.

“At the time of the search of the church building, the adjacent rectory and the technical premises of the parish, both priests were already in custody, which means that they could not control these premises,nor the actions of the Rosguard [National Guard of Russia] in any way”, the bishop further points out in his letter.

ACN is following these sad events with great concern, in view of the repeated news about the disregard for basic principles of human rights by Russian Special services, who have taken the clergymen into custody. 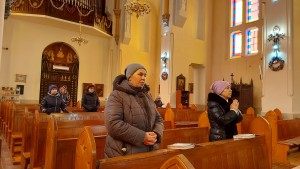 Prayer for the peace in Ukraine (Diocese of Odesa-Simferopol).

“We call for the widest possible dissemination of information, in order to free the imprisoned chaplains. We appeal to the authorities and all people of good will with a request to join the cause of the release of the priests, as well as for increased prayer”, appeals the bishop, in the statement.

In accordance with this request, ACN is asking all benefactors and friends to pray for the speedy release of Father Ivan Levytsky and Father Bohdan Heleta, as well as for guarantees that they may continue to serve the spiritual needs of the Catholic faithful living in Berdiansk, unhindered.