SYRIA: “It is an obligation for us to help the Christians of the Middle East”

Christian IDP’s from northern Syria need our help to survive in a country still suffering from international sanctions and the destruction left by the civil war in the country. 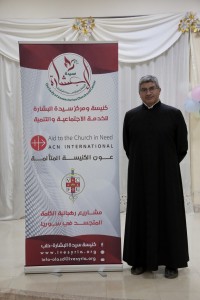 Hugo Alaniz is a missionary priest of the Institute of the Word Incarnate. An Argentinian, he has been a priest for twenty-five years and arrived in Syria at the end of 2017. During an interview with Aid to the Church in Need  Father Hugo recalled travelling at the height of the war from Damascus to Aleppo, a city that was still under the control of the rebel groups.

“It was a very long and dangerous journey. We travelled through the desert because the main road was not fit to travel on. I witnessed a desolate scene, with many abandoned towns and villages, and in the outskirts of Aleppo nothing but ruins.”

“Until a year and a half ago many of the areas around Aleppo were still full of terrorists, and we witnessed clashes very close to us. We saw some very sad and shocking things in the hospitals, with many people wounded by bullets or shrapnel from terrorist attacks launched from outside the city”, Father Hugo recalls.

The fighting has now ceased in Aleppo, but the economic situation has changed little. At the present time, according to official figures, around 90% of Syria’s population is living below the poverty threshold.

“I estimate that a family of four or five people would need around 350/400 USD a month to live on, yet salaries are usually around 25 USD. In other words, they are not living, but simply subsisting. It is very difficult for them”, Father Hugo tells ACN representatives during their visit to Aleppo.

He reports that there is food in the supermarkets, but people cannot afford all the basic necessities like milk, because the prices are so high. Besides, because of sanctions it is almost impossible to get products from abroad, such as medicines, spare parts for machines and cars and certain types of clothing and food that are not produced in the country.

When he arrived in Aleppo in 2017, in response to an appeal from the Latin Bishop George Abou-Khazen, Father Hugo took charge of the church of Our Lady of the Annunciation, in the eastern part of the city. It was an area that had been very hard hit during the fighting and most of the population had already abandoned their homes.

“People had either moved to the centre of the city or left the country altogether. Even the religious community who lived in this church had gone. Bishop George felt it was time to start renewing the church and a small parish centre , in order to encourage people to return”, Father Hugo explained.

They began in April 2018 and Father Hugo is pleased with results so far. “It was significant, because in the midst of all the ruins all around there was something like a little ray of light for the local people. Slowly, they began to return, not only from other parts of the city, but also from elsewhere within Syria. In the last two years some families have even returned from Lebanon.” 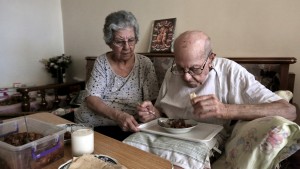 Among those who have suffered most since the end of the devastating war are the elderly and the sick. During the war, many families who had male children left because of military service. Even now, after the war has ended in most of Syria, compulsory military service still lasts many years. Many families prefer to leave the country, but as a result, the elderly, the sick and the handicapped are left behind alone. The missionaries of the Incarnate Word are trying to ease the burden of their terrible loneliness. “They are very much alone. We visit them and see what they need. We start by providing medication, and also incontinence pants for the sick and elderly. We also have a community kitchen, where a group of volunteers cook three days a week, in order to provide these people with food in their homes. On the other three days they cook for the other people living or working in the surrounding area.” 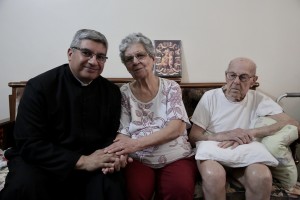 Trip of CRTN to Syria in August 2021
Fr. Hugo Alaniz with Mousa Ogzan and Moufida Jallouf and Mousa Ogzan (IDPs from Idlib) in Aleppo

Many of the old people living in the area are getting this help, including Moufida Jallouf and her husband Mousa, who fled to Aleppo via a humanitarian corridor from the north of Syria, where the armed conflict is still ongoing . They have effectively become internally displaced: refugees inside their own country. Her husband, who is seriously ill and unable to walk, sat by her side during ACN’s brief visit to their home, together with Father Hugo. Moufida recalled how the armed Islamist groups invaded their village. “They took away our livelihood, our money and our homes. They wouldn’t let us ring the church bell either, but we continued praying and making the sign of the cross privately inside our homes.”

“We can’t afford even the basic necessities of life now, so thank God the Church is helping us. We want to thank ACN for supporting the parish of Our Lady of the Annunciation, so that we can also survive”, Moufida adds.

The work to be done is immense, and the situation might seem absolutely desperate, but the Argentinian priest is quite clear: “It was from here, from Syria, Palestine, Jordan and what is today Israel, that the first Christians came… I believe that it is an obligation for us, as Church, to help the Christians of the Middle East. Not only because of the fact that this is the Holy Land, but because it is thanks to them that we came to know the Gospel message.”

“Thanks be to God, we have been able to help many families, and so our appeal to the benefactors of ACN is ‘please don’t forget us, please don’t forget our communities here who still need outside help’. Thanks to your help we can continue to play our small part in supporting the Christian community, here in Aleppo, in Syria, in the Middle East. It is an immensely precious help. Whatever you can continue contributing will have great significance, especially for these people, who have lost everything, who continue to be in great need, who need your help”, Father Hugo concludes.