“What more can I say? Sometimes, in the face of disaster, people think that God should not have allowed it to happen. But we who live with death – avoidably, for we could avoid it by moving out of the city – we can see that God is always there; His providence alleviates the evil to the extent that man’s freewill “permits” it.”

The Syrian army and its allies have now gained control of 80% of Aleppo. Remaining civilians are desperate to get out of East Aleppo right now as the regime forces of President Assad continue to mercilessly bombard almost 100,000 civilians who are stuck in a two kilometre squared pocket and have nowhere to flee to.

A fragile ceasefire to evacuate rebel fighters and civilians trapped in the besieged ended on Wednesday morning and  shelling resumed in eastern Aleppo. Highly explosive munitions are being used on an area “that is no larger than two square kilometres with no less than 80,000 human beings who are mainly civilians…most of them women, children and the elderly.” The UN has a plan to evacuate them in buses to safety just 4 kilometres away. But before they can move the shelling and bombing must be stopped.

The United Nations has now confirmed that the Assad regime and Iran-backed Shia jihadists from Lebanon, Iraq and further afield are committing atrocities in areas they recaptured from the Syrian opposition in Aleppo. The UN says people are getting ‘shot on the spot’ by government forces as they attempt to flee and has received reports that men aged between 30 and 50 were separated from their families while other displaced people reported being taken in for questioning and having their identity cards confiscated. Up to 160 people may have been killed. Those massacred included women and children, who were killed after being dragged from their homes. 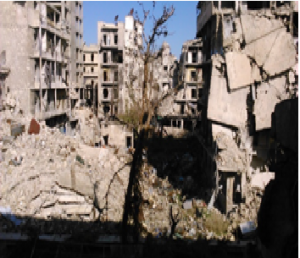 00 civilians have been forced to flee from the opposition-controlled Eastern areas which have been besieged for 3 months to West Aleppo. The Red Crescent and other humanitarian organisations are doing their best to relieve the suffering of those in greatest need.

Pope Francis sent a letter through Cardinal Mario Zenari to the Syrian President Bashar al-Assad appealing to him to respect humanitarian laws. In his letter the Pope  “expressed again his appeal to President Bashar al-Assad and to the international community for an end to the violence, and the peaceful resolution of hostilities, condemning all forms of extremism and terrorism from whatever quarter they may come, and appealing to the President to ensure that international humanitarian law is fully respected with regard to the protection of the civilians and access to humanitarian aid.”

In Western Aleppo hand-made missiles, gas tank bombs and mortar shells are targeting heavily populated areas, although the bombing has lessened within the last 2 weeks since the Syrian army started their offensive on the opposition forces.

Last Saturday the Jesuit centre where Fr Ziad Hilal lives was bombed at 5.45pm. Fortunately no one was killed as the daily Mass had been moved to another location that day and the centre was unoccupied at the weekend.

West Aleppo has not had electricity for 4 months and people rely on generators distributed throughout the city. A large part of Aleppo still has no water supply and civilian residents rely on wells or mobile water trucks to fill their home tanks. Most people cannot afford fuel to heat their homes as prices have shot up and many are forced to burn wood or even old rags to keep warm.

Internet service is unreliable and often cut off for several hours.

At the moment, there is a flood of news. The Syrian regime army  has regained areas which it had lost control of since 2012. The inhabitants hope that this recovery will remove the rebels, and that we will no longer have shells falling on us. 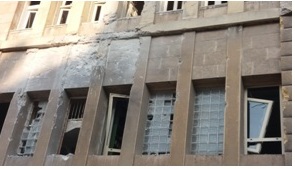 The Jesuit center in Saint-Vartan was also attacked as the pictures show. Scarred walls, crucifix machine-gunned and mutilated but it has remained there for five years , in solidarity with our suffering and our isolation. The church is still there, disfigured, like our city, revealing to us the suffering of God, faced with the savagery of men. The area around Saint Vartan’s is shocking, nothing but ruins.

Civilians from the Eastern areas are beginning to flock to us. Unfortunately many associations and even humanitarian organizations are jumping on the opportunity to make money. Everyone wants to give “psychological support”. It’s easy to do and it pays a lot. You put  on a little music, you dance in the open air, and then you go home. It does not matter whether or not the children attending are cold, whether they want to participate in your event or not, if they have more urgent needs, or even if they are in a state of mind that allows them to take part in this so-called “psychological support”. The important thing is to do the job and get the money in exchange. But even worse are those organizations that turn up in large numbers when there is a television crew filming, and go back as soon as the shooting ends. Others bring food and distribute it by throwing it to people as if they are animals not human beings.

In Jibrin, where the displaced are gathered and housed,  the Palestinian Red Crescent Society is trying to do something but it can not afford it. The Syrian Red Crescent does not support them because it is up to UNRWA to do so, and the UNRWA does nothing because the beneficiaries are not Palestinians. Local associations and international organizations pass, distribute, and go without collaboration with those Palestinians who are dealing with the displaced Syrians. 506 families are listed as needing help.

It seems that there are now a thousand displaced people who have arrived at Jibrine. They are hungry and need emergency aid.

It was 5:45 pm. Every Saturday, people from CLC come to the residence for half an hour of meditation followed by a mass at 6 pm. But this week, Fr. Ziad was giving a retreat to the CLCs in the Franciscan sisters. 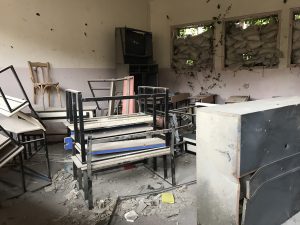 Four shells fell in total: one 40 meters away, the other on us, the 3rd on a neighbouring building, the 4th 20 meters away. One of the four shells hit our residence between the first and second floors.