Although the formal occasion for the Pope’s visit to largely Lutheran Sweden was to mark the 500th anniversary of the Reformation, the theme and underlying reason for the trip was to promote ecumenism and unity among Christians.

Before setting off, the Pope tweeted on Sunday: “I ask you to please pray that my journey to Sweden might contribute to the unity of all Christians.” Francis greeted media professionals travelling on board the papal plane to Malmo on Monday morning by saying: “This journey is important because it is an ecclesial journey, it’s very ecclesial in the field of ecum

enism. Your work will be a big contribution in making sure people understand well.”

Pope Francis arrived at Malmö International Airport, where he was greeted by state and religious authorities including members of the World Lutheran Federation at an official welcome ceremony on the tarmac.

Before travelling to the Lutheran Cathedral of Lund for the joint ecumenical prayer service on Monday afternoon, Pope Francis met privately at the airport with Swedish  Prime Minister, Stefan Löfven, and the Minister of Culture and Democracy. 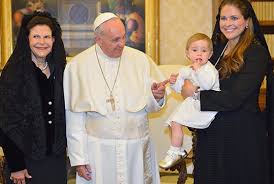 After making the 26-mile trip to Lund by car, Pope Francis also paid a courtesy visit to the Swedish King and Queen, Carl XVI Gustav and Silvia, and other members of the royal family at Lund’s Royal Palace (the Kungshuset). Francis then led an ecumenical prayer service with Lutheran leaders in Lund Lutheran Cathedral.

During the service Catholics and Lutherans also read out five joint ecumenical commitments, including the commitment to always begin from a perspective of unity. After the service the Pope and Bishop Munib Yunan, President of the Lutheran World Federation, signed a Joint Declaration.

In the afternoon the Pope took part in a second ecumenical event in Malmö arena and met with delegations of different Christian Churches present for the occasion.

On Tuesday morning Pope Francis concluded his 26-hour pastoral visit to Sweden by celebrating a Mass in the southern city of Malmo for the nation’s small Catholic community. Pope Francis initially wanted his trip to Sweden to focus purely on promoting Christian unity. In the end after reflecting on his role as pastor of the Catholic community, he added a day to the visit so he could respond to the “fervent request” by the country’s small Catholic community that he celebrate a Mass for them. However, he deliberately scheduled the Mass on the following day, in order to “avoid confusing” the ecumenical event with the Catholic one.

Over 15000 people, including thousands of Swedes and many immigrants from Latin America, the Middle East and Asia, lined up outside the football stadium in cold autumn rain to attend the papal Mass. The Mass was a morale boost for Sweden’s small Catholic community, which numbers only about 150,000 out of a population of about 10 million. That total is less than the attendance for some papal ceremonies in Rome.

During the Mass Francis turned his attention to largely secular Sweden’s record of accepting tens of thousands of asylum seekers last year, in contrast to many other European nations. He based his homily around Jesus’ “Sermon on the Mount,” which lists the Beatitudes, but with a modern twist.  Francis added some new Beatitudes praising as “blessed” those in this overwhelmingly non-religious nation who take in asylum seekers:

Francis’s statement held special symbolism in Malmo, which has become a gateway for thousands of immigrants who have fled from Middle East wars over the last few years.

Sweden took in 163,000 asylum seekers last year, more than any other European Union state relative to population. Its reputation for tolerance and stability have made it a haven for refugees for decades.

The Pope also praised Sweden for its strong defense of the environment and efforts to fight the effects of climate change, saying; “Blessed are those who protect and care for our common home.”

At the end of the  Mass in Swedbank Stadium, Pope Francis gave an Angelus address:

“As we conclude this celebration, I would like to express my gratitude to Bishop Anders Arborelius of Stockholm for his kind words, and to the civil authorities and all who helped in the planning and execution of this visit.

I offer a cordial greeting to the President and the Secretary General of the Lutheran World Federation, and to the Archbishop of the Church of Sweden. I also greet the members of the ecumenical delegations and the diplomatic corps present on this occasion, and all those who have joined us in this celebration of the Eucharist.”

After celebrating Mass, Pope Francis travelled back to Malmö International Airport for an official departure ceremony before flying back to Italy. Just after landing in Rome’s Ciampino Airport at 3:10pm , Pope Francis went to the Basilica of Santa Maria Maggiore to offer thanks for the success of his two-day Apostolic Trip to Sweden. He prayed in silence for several minutes before the ancient image of Mary, Salus Populi Romani. The Holy Father always venerates this icon before and after his international apostolic trips.