Life in northern and eastern Burkina Faso has been virtually paralysed by terrorism and the resulting critical security situation. The threat of Islamist terrorism is on the increase, and the jihadists want to establish an Islamic caliphate in the region. Since 2019 almost a million people have been uprooted from their homes. The few remaining villages that are still inhabited are now home to thousands of internal refugees. Over a thousand schools have been closed or destroyed, children and young people are at constant risk of being abducted and forcibly recruited as child soldiers. The parishes are deserted, and the priests and catechists can no longer travel, except at risk of their lives, so bad has the security situation become. 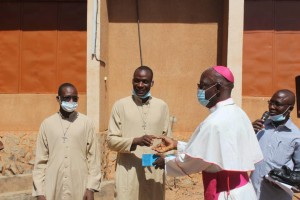 Radio is the most important means of communication in this region. This was already the case before the crisis, since most people cannot read or write and even those who can read can only rarely get access to books, which are simply too expensive and difficult to obtain. This is the second poorest region in the country and average monthly income is just around 60 to 65 dollars. So all communication between the various centres – whether in the area of development, education, reconciliation work or healthcare advice – is conducted by radio. But now especially, since the escalation in the violence has meant that so many schools and parishes have had to be closed, radio plays a still more important part in the life of the people. And then there is the pandemic, of course.

So now, 800 Catholic refugee families, who have been forced to flee from the jihadist attacks, are delighted to have been given a radio, a solar lamp and a USB memory stick each, with pre-recorded catechetical and educational units for school-age children.