It‘s the fulfilment of a long-standing dream for them. At last, after so many years, the Catholics of Pawe, in northwest Ethiopia, have a “proper” church of their own. And it was thanks to the donations received from benefactors that we were able to help see their dream fulfilled. 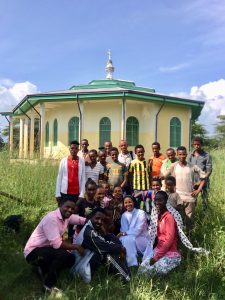 The people living here today have seen hard times in the past. Around the middle of the 1980s, under the brutal communist dictatorship of Haile Mariam Mengistu, they were deported here from the south of the country. Carried out under the guise of a humanitarian measure to alleviate the famine in that region – a famine that claimed hundreds of thousands of human lives – it was in reality a brutal mass deportation and resettlement of around 1 ½ million human beings. For thousands of elderly people, sick people and children the suffering was unendurable and they died as a result.

At the time around 15,000 people were deported to Pawe, among them 3,000 Catholics. They found themselves in an inhospitable region, facing extreme heat and drought such as they had never experienced before in their lives. These harsh living conditions were still further exacerbated by the regime, which banned any form of religious expression. So the people were deprived even of the consolation of the sacraments and the life of the Church. At most they could only practise their faith in secret and at the risk of severe punishment. Yet despite this, they remained faithful to their beliefs.

Following the collapse of the regime, which was ultimately responsible for the deaths of an estimated 2.5 million people, the Christian faithful were at last free to live their faith openly once again. They got together and built a small mud chapel with their own hands, but it collapsed again in the next rainy season. Again and again they tried to build a permanent chapel, but they were never able to raise the money to do so. And of course the mud chapels they were able to build were far too small for the ever-growing number of Catholic faithful.

But now, thanks to the generosity of our benefactors, they have at last been able to build a beautiful and solid church in which Holy Mass can be worthily celebrated and they can all gather together to pray. They send their heartfelt thanks to all who have made this possible!

In a related development, again and again we are asked for help in providing bicycles and mopeds for the priests and catechists of the diocese of Eluru in southeast India. For many of the 1,150 villages of the diocese where the Catholic faithful live are accessible only via narrow, unmade tracks and the priests and catechists would otherwise have to spend hours on foot, walking from one village to another. At the same time, a car would be no use, since the narrow tracks are unsuitable for them. Hence, a moped or a bicycle is an ideal way of saving time and energy and providing a more intensive ministry for the people. 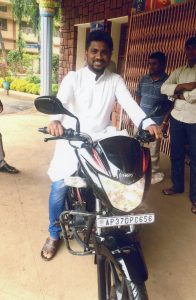 For one thing, the faithful need pastoral support. Many have not long been Christians and need intensive support and accompaniment if the faith is to put down deep roots within them and enable them to grow into the life of the Church. At the same time, however, they need a great deal of help in the needs of their everyday lives. There is deep poverty in the region; most people work as day labourers and live from hand to mouth. Even the children have to work in the fields of the big landowners, herding the cattle of the rich or running themselves ragged as message bearers. Most cannot even think of attending school. Entire families live in tiny grass huts, without running water or any modern conveniences. On average, these families have to live on half a Euro a day, and sometimes they are cheated even of these paltry wages, so that the whole family has to go to bed on an empty stomach.

Thanks to our benefactors, we have been able to provide four mopeds for the diocese, so that the priests and catechists can now more easily reach these villages and bring the people the help they need. Bishop Jaya Rao Polimera extends his heartfelt thanks to all our benefactors and promises his prayers for all who have helped!