SPEAKING UP FOR RELIGIOUS FREEDOM 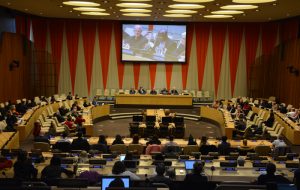 Defending and promoting religious freedom is one of the most pressing issues for the international community, according to experts at a Holy See event on March  1 in the Economic and Social Council Chamber at United Nations Headquarters.

The Permanent Observer Mission of the Holy See to the UN hosted a conference entitled “International Religious Freedom: A New Era for Advocacy in Response to a New Age of Challenges and Threats,” together with the NGO Committee on Freedom of Religion or Belief.

Archbishop Bernardito Auza, Permanent Observer of the Holy See to the United Nations, in remarks delivered by Msgr. Tomasz Grysa, said that although the rights to freedom of thought, conscience and religion are protected under international law, there continue to be severe acts of intolerance, discrimination, persecution and even genocide against religious believers on account of the beliefs they hold.

“Because of the attacks the world has witnessed in recent years against various groups of religious believers, the protection of the right to religious freedom must be one of the most urgent responsibilities of the international community,” he said.

These violations against the right to freedom of religion impact believers of nearly all religions around the world, by both State and non-State actors. 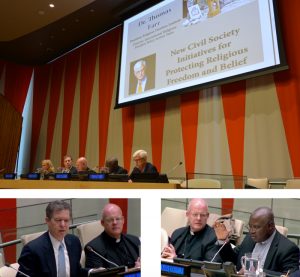 He highlighted the February 4 meeting between Pope Francis and the Grand Imam Ahmad Al-Tayyeb, one of the leading figures in Sunni Islam, who, in their landmark joint Declaration on Human Fraternity for World Peace and Living Together, affirmed that every person “enjoys the freedom of belief, thought, expression and action,” called for the protection of places of worship, and advocated for the establishment of equality under the law under the concept of full citizenship for all, including minorities.

Ambassador Samuel Brownback, the US Ambassador at Large for International Religious Freedom, called upon the international community urgently to join the effort to advance worldwide religious freedom.

“You only have to look briefly to see some dire situations of people in faith around the world,” he said, noting that in many countries, if someone is not part of the majority faith, they are likely being persecuted. We need your advocacy. The situation is dire and we can’t just talk about it, we have to do something.”

Ambassador Brownback said 84 countries were present at a ministerial meeting last year in Washington to explore practical ways to fight threats against religious freedom and discrimination based on faith.

He said that one practical way States can help strengthen religious freedom is through education, by empowering youth to accept those of differing beliefs.

“Textbook materials can be derogatory or event hateful towards religious minorities,” he said, suggesting that something as simple as changing textbooks is one of the many solutions to bridge the gaps between different faith communities and resolve religious tension.

Resolving religious tension is often a matter of life or death for many believers. Archbishop Ignatius Kaigama of Jos, Nigeria spoke to the reality of his Archdiocese and country, where the terrorist group Boko Haram threatens both the Christian minority as well as other Muslims who do not share Boko Haram’s extremist ideology.

“Thousands of people in Nigeria have been maimed, dehumanized and killed,” he said. “The bitter rivalry and violence in the name of religion gives the wrong impression that religion is a force of evil.”

Many Christians in Archbishop Kaigama’s community have lost family members to Boko Haram.

He said that protecting religious freedom leads to peacebuilding, and alluding to the relative harmony in which Christians and Muslims live in Southern Nigeria, he accentuated the tumultuous tensions caused by Boko Haram and the Fulani herdsmen in his community in Northern Nigeria.

Archbishop Kaigama called for more interreligious dialogue between the two religions and said he has tried to set an example by building meaningful relationships of mutual trust with Islamic leaders in his community, who share the common goal ending the atrocities inflicted by Boko Haram. 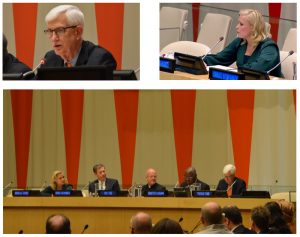 Dr. Thomas Farr, President of the Religious Freedom Institute, said that evidence supports the argument for increasing freedom of religion through interreligious dialogue.

He emphasized that religious freedom is a fundamental right, necessary for the safeguarding of all other human rights.

Dr. Hajnalka Juhász, Ministerial Commissioner and Member of the National Assembly of Hungary, said that Hungary has multiple projects to support religious freedom internationally and focuses in particular on protecting and helping persecuted Christians in the Middle East and Africa, particularly Iraq, where Christians have lived for centuries.

In 2003, she said, 1.5 million Christians lived in Iraq. Their number has now decreased to 250,000. Hungary is helping Christians forced to flee due to violent persecution by ISIS return home, especially through the Hungarian government’s rebuilding homes, Churches and public buildings in the town of Teleskoff, Iraq.

Many homes and ancient cultural heritage sites, including churches, have been destroyed by the terrorists. For Christians to return home, they must have an adequate place to settle, with homes, schools and hospitals rebuilt and ready for society to reintegrate.

“Rebuilding the Christian community can play a key role in peacebuilding and religious tolerance,” she said. This will require well-orchestrated efforts by governments and civil society, that she hoped other countries would join in developing.

About 300 people attended the conference.