The diocese of Gizo on the Solomon Islands is celebrating the Jubilee in a very special way: with the pilgrimage of the mobile Holy Door 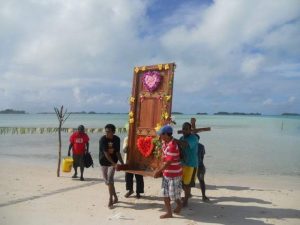 “It is beautiful when people are able to forgive and start afresh,” Bishop Luciano Capelli says.

Carrying the Holy Door high on their shoulders, from island to island, village to village – this is how the diocese of Gizo on the Solomon Islands is celebrating the Jubilee Year of Mercy. More than 40 islands lie scattered across a very extensive region of the Pacific Ocean.

Those engaged in pastoral care in the diocese of Gizo thought that if the isolated people were not able to come to the cathedral to walk through the Holy Door, then the Holy Door should tour the parishes and villages to reach the people. “In this way it brings forgiveness and reconciliation,” Bishop Luciano Capelli of Gizo told the pontifical foundation Aid to the Church in Need (ACN). By all appearances, it is just a plain door about two metres in height, made of light brown wood. It could be the front door of any house. However, the difference is that this is a mobile Holy Door. “It was made by young trainees at the workshop of the local school,” the Italian-born bishop said.

“However, the door cannot move by itself.” A boat made of wood, the most common mode of transport here, was used to take it from one place to the next. “We sailed right across the Pacific Ocean on a six-metre-long motor boat, kilometre after kilometre on the open sea.” The journey was not easy, despite the awestruck mood of the participants. “Sometimes it rained, sometimes the waves were very high, or there was strong wind…”

Every village welcomed the Holy Door by holding a special ceremony with flowers, dances, animals, traditional costumes … as well as the “warriors, the defenders of the tribes”. With faces painted white and wearing skirts of dried flowers, “they performed a special choreography that represents the official welcoming ceremony,” the Salesian missionary explained in the interview. “However, despite all the folklore, we noticed that a solemn atmosphere prevailed. The faithful were well aware of the gravity of the moment.”

A liturgical celebration was then held that explained the significance of the Jubilee. This was followed by a prayer vigil with an opportunity for confession and a discussion between feuding individuals and groups, who were invited to forgive. “These are remote areas without judges and solicitors … The people dispense justice, they hold a ‘celebration of settlement’,” Bishop Capelli added. The bishop asserted that in this region, a key role is played by the evangelization work of the church and the significance of forgiveness and reconciliation.

We thank you from the bottom of our hearts, Pope Francis!

The mobile Holy Door initiative lasted more than two months and toured about 20 villages. “Participation in the liturgy has never been this great.” The Holy Door remained in each village or at each tribe for two or three days. “It was especially moving to see young people helping old people who are no longer able to walk through the Holy Door of Mercy,” Bishop Luciano said. All the people of Gizo thank Pope Francis for this experience. As they wrote in a letter to the Holy Father that Bishop Capelli personally delivered to him in Rome, “Thank you for proclaiming the Holy Year, which has done so much to strengthen the local Catholic communities. Thank you for letting us feel the fellowship with Rome and with the world.”

“The pilgrimage of the Holy Door unleashed a strong solidarity movement among the parishes,” the Bishop of Gizo affirmed. “It was very beautiful teamwork.” The people live in isolation from each other throughout the region. But “they gathered together to pray, to sing and to share.” (…) “It is wonderful when the people are able to forgive and start afresh.”

The diocese of Gizo, which has been headed by Bishop Capelli since 2007, is made up of more than 40 islands that lie scattered across a radius of 300 kilometres. More than 10 different languages are spoken in the region. The diversity and the distances have frequently been a cause for concern for the Salesian missionary. Because he is aware of the importance of the proximity of the bishop to the people in encouraging them to follow the Gospel, he bought an ultralight plane when he was 60 years of age which allows him to reach the most remote places in the region.

Extremely changeable weather, constant humidity, a lack of resources, poor connections, poverty … the problems facing the diocese of Gizo are not exactly minor. The standard of living is poor, the people there primarily subsist from fishing and agriculture.

The international Catholic pastoral charity Aid to the Church in Need has been supporting the diocese of Gizo for years with various projects, such as Mass stipends for priests and funding for the training of seminarians.