Seminary in Uganda is ‘bursting at the seams’

In Uganda, the number of vocations is rising each year. According to Vatican statistics, every fifth seminarian worldwide now comes from Africa. The seminary for mature vocations in Kampala, Uganda, can now scarcely accommodate the many candidates who want to study for the priesthood. This was the report of the rector of the seminary, Father Joseph Sserunjogi, to international Catholic pastoral charity Aid to the Church in Need (ACN).

The lack of space in the seminary has now reached a point where even the office rooms within the seminary and other rooms in a nearby monastery are being converted into dormitory accommodations.

Even with these changes as many as 15 students have to cram into a dormitory area of just 15 square meters, Father Sserunjogi told ACN. This was hardly a fitting state of affairs, he observed, adding that in many rooms there is a lack of fresh air and a consequent danger of ill-health. 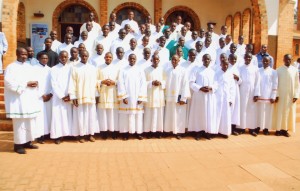 At the same time, Father Sserunjogi finds it very hard to turn away vocations simply because of the shortage of space. For the coming academic year, beginning in September, there have been 48 applicants, and the seminary has only been able to accept 28 due to the lack of suitable accommodations.

This is a “very regrettable” situation, according to Father Sserunjogi, because “priests are needed everywhere and yet for lack of space we have to turn away those who feel themselves called.”

The priest told ACN that the seminary is trying everything possible to turn away as few potential candidates as possible. He continued by saying he believes that in future it will be essential to extend the seminary, since they cannot allow themselves to lose possible vocations.

The mature vocations seminary was opened in 1976. The diocese had a building available and the then Bishop of Kampala recognized that there are many men who have already learned a trade or profession yet subsequently feel themselves called to the priesthood. 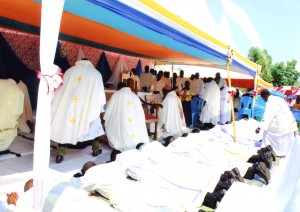 It all began with just a handful of seminarians, and of the 17 candidates in the “first wave,” nine have now been ordained to the priesthood and two of them have gone on to become bishops. Since the seminary first opened, no fewer than 180 priests have issued from it.

At the present time there are 155 men studying for the priesthood in the seminary, and the number is growing steadily. All have had other trades or professions before entering the seminary; many were teachers, others were white collar workers, policeman or veterinarians.

The oldest candidate, who is now a priest, was 56 years old when he entered the seminary, the rector told ACN, but most are aged between 24 and 31 and come from one of the 15 dioceses in Uganda or from neighboring countries like Kenya, Tanzania, Rwanda and Sudan.

In Father Joseph’s experience, the advantage of these late vocations lies in the fact that the men are “already more mature” and have reached their decision independently and with conscious deliberation. On the other hand they tend sometimes to take longer than the young seminarians to get used to life in the seminary.

The priest said that the most important thing is to communicate a sense of joy in the priesthood. At the same time it is important to prepare his seminarians for the real situations they will face as priests in Uganda. Many people in Uganda live in extreme poverty; they have no shoes, no watch, and yet they are willing to walk for hours in order to get to Holy Mass.

The longing of the people for God is great, Father Joseph told ACN. When a priest is held up by the appallingly bad roads and arrives late in a village, the faithful are willing to wait patiently many hours for him. Yet, at the same time, they expect a great deal from the priest.

“They expect him to take care of everything,” the rector explained to ACN. This can be a severe challenge for a priest to represent in every respect the only hope for many people, and he must at the same time make clear to people that what matters above all is Jesus Christ.

Father Joseph also explained how seminarians must learn how to deal with the still widespread belief in witchcraft that exists in many regions. The rector explained that it was ineffective to ban such practices. Instead, the right way is to show the people that the Christian God is the true God, who is everything that they need.

“Many people believe for example that a particular stone will bring rain,” Father Joseph said, “but we must above all do something for the people, so that they will understand that Christianity is the true religion. Our deeds are more important than our words here!” Social commitment was also important, he said, since “a hungry man will not listen to our preaching.”

In Uganda, the number of vocations is rising each year. According to Vatican statistics, every fifth seminarian worldwide now comes from Africa. At the same time, the number of Catholics is also rising so that in many regions there are still far too few priests.

ACN is particularly committed to the training of priests in Africa and supports seminarians throughout the continent. The charity also helps to fund the construction, extension and renovation of seminaries.