PRAY FOR NIGERIA AT THIS CRITICAL TIME

Mons. Kaigama: “IF THE ELECTIONS ARE MARRED BY VIOLENCE MANY INNOCENT NIGERIANS WILL PAY THE PRIZE”

“ACN can mobilize their world net-work of friends, benefactors and supporters to commit Nigeria to special prayers at this critical time of elections.”

Nigerians will be going to the polls on 16th February and 2nd March 2019 to elect a President, Federal Parliament and other representatives. Parts of the Country have continued to experience violence from the Muslim extremist groups such as Boko Haram.

ACN Malta’s Grace Attu spoke with Mgr Ignatius AyauKaigama, Catholic Archbishop of Jos regarding the current situation, the forthcoming general elections in Nigeria and his hopes for the country.

As the Country’s General Elections approach next weekend, what is the situation across the Country?

Mgr Kaigama:  Like every pre-election period everywhere in the world, political emotions here are high. Many politicians and their allies are politically paranoid. One hears of how easily some politicians switch from one political party to another which shows that their reason for being in politics is not motivated by good political principles or ideology or people-friendly political manifestos, but mainly for personal interests. Most of them are hardly concerned about good governance and improving a lot of the common person, especially the poor, marginalized, unemployed, victims of religious extremism and the millions who are also victims of the poisonous by-products of pandemic corruption. 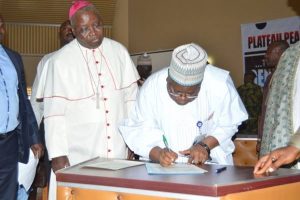 Compared to previous pre-election campaigns,  the present campaigns even though have recorded some casualties are fairly moderate, but what stands out is the sometimes wild and unsubstantiated statements made by some politicians that could be regarded as hate speeches or incitements to violence.

While a few political rallies have already recorded a few accidental deaths and the disruption of peace, we must commend the campaigns of most of the parties that have carried out their activities peacefully. There is however a general tension and apprehension as to what may be the likely reactions of those who already feel that there might be manipulations of the elections.

Attacks by Boko Haram have intensified lately. Do you think this is connected to the elections?

MgrKaigama:  Even before now, Boko Haram has intensified its attacks by killing a number of military personnel. The insurgents have become so daring as to take on armed personnel and to inflict heavy casualties on them and not even sparing International Aid workers. They boldly warn the international community to stay off their track. They are doing their best to take over certain parts of Nigeria and neighbouring countries to consolidate their quest for the Islamic State of West Africa.

Attacks by Boko Haram have surprisingly intensified in the last couple of days in areas like Michika, Shuwa, Madagali, Mubi, – in Borno and Adamawa States. Some people say that the renewed attacks are politically motivated or sponsored to score political points or may be an attempt to disenfranchise some of the electorates during the elections. It is clear however that Boko Haram wants to make a statement that it has not been defeated. The threat by Boko Haram is still real. They are far from being defeated.

Do you have any concerns?

MgrKaigama: I should be concerned. When peace is disrupted, Catholic religious leaders like me suffer more than those elected into government because people flock to our houses and offices knowing that there are no gun-wielding police or soldiers to scare them off or police dogs to sniff and bark at them when they come to ask for help for the basic things of life.  We have to manage to assist those who are displaced and without means of livelihood. Because of how overstressed and overwhelmed we religious leaders become when there are crises, we pray and work very hard to proactively promote the culture of peace and we are making concerted efforts to ensure that we have free and fair elections which will culminate in peace for all. 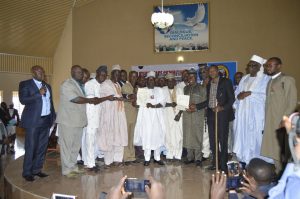 If the elections are marred by violence many innocent Nigerians will pay the prize.  I hope for fair, peaceful and credible elections; for good, patriotic, selfless and God-fearing leaders to emerge, who will be more concerned about the masses rather than their personal ambition and luxury of an office.  Well-formed and qualified youths are on the streets in huge numbers without jobs. We hope that those aspiring to offices at all levels will consider the plight of the youth as a priority.

What role is the Church playing to contribute to the proper conduct of elections?

MgrKaigama: As the Catholic Church in Nigeria does during every election, our Justice Development and Peace Commission (JDPC) is proactive and highly sensitive to the need for peaceful and fair elections. The JDPC has served creditably as election monitors/observers in the past, pointing out flaws, weaknesses and strengths witnessed. A statement has recently been issued by the Catholic Bishops’ Conference of Nigeria encouraging prayers, proper conduct of elections and correct attitudinal approach by citizens to the elections.

The Church in the Archdiocese of Jos has been frantically multi-tasking as a way of contributing to the peaceful elections. We have cautioned our members to be law abiding, to go on peacefully and not to allow themselves to be used by selfish politicians. They must ensure that they possess their voters’ card and go out to vote. As priests, we encourage our people to be prayerful and alert during this season; we caution ourselves the clergy to remain non-partisan. Our Justice, Peace and Development Commission has in the past two years been running projects in target communities for peaceful elections. They have taught different communities what to ask for by training them on the ‘Charter of Demands’ when the politicians come looking for their votes. Our JDPC has organized training on peace-building and Alternatives to Violence Programmes (PB/AVP) in schools and communities. As part of the activities leading to the elections, our Dialogue Reconciliation and Peace (DREP) Centre recently organized a peace accord signing ceremony for all the governorship candidates in Plateau State, which was witnessed by traditional/religious heads, civil society groups, senior security personnel and various community stakeholders. Also, going into the elections, as a Church our JDPC is officially accredited as election observers. We are equally prepared to intervene and manage post-election violence should it occur. We pray it doesn’t.

What are your hopes for Nigeria?

Mgr Kaigama: I am a strong optimist. I believe strongly that the best for Nigeria lies somewhere close by. I am deeply patriotic about my country Nigeria. There are so many negative things said about Nigeria but I believe that Nigeria with all her defects and imperfections will surprise the world one day, leaving those who ridicule and write her off spell-bound and flabbergasted. Nigerians are a peaceful, joyful, hardworking, religious and resilient people who are only unfortunate not to have selfless leaders with vision but leaders who take joy in pilfering the enormous wealth God has blessed us with. This, they do with the collaboration of some foreign countries, companies, organizations and individuals. 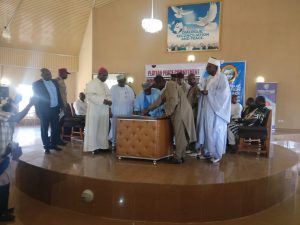 Many like me believe that Nigeria will survive as one nation and one people. The time is coming nearer when a moral revolution by the youths, transcending tribe and religion will bring into leadership only serious persons who are prepared to suffer and even lay down their lives for Nigeria and Nigerians rather than asking the poor people to die for them (political leaders). Those who manipulate elections, buy votes, use government structures to win elections, announce losers as winners and winners as losers will sooner than later have nowhere to hide.

How can ACN and her benefactors help Nigeria at this time?

MgrKaigama: ACN can mobilize their world net-work of friends, benefactors and supporters to commit Nigeria to special prayers at this critical time of elections. We need support our various peace-building, awareness raising initiatives and various proactive programmes of peace education organized before, during and after elections. Furthermore, support for training/empowerment programmes for our youth, teenage girls and widows is needed, to give them hope and to keep them out of trouble.

Above all, let us be in communion of prayers for peaceful elections and general stability, hoping that by God’s grace the forthcoming elections will produce visionary leaders who will lift this promising country from grass to grace.