Pope to Bahrain Catholics: “Preserve and deepen your Christian joy”

On the final day of Pope Francis’ Apostolic Journey to Bahrain, the Pope encouraged the nation’s Catholics to joyously bring God’s joy to the Gulf nation’s diverse flock, and made appeals for peace in Ethiopia and Ukraine.

“Preserve and deepen your Christian joy, spreading it to all around you, and remember that with God, you can face and overcome everything”. 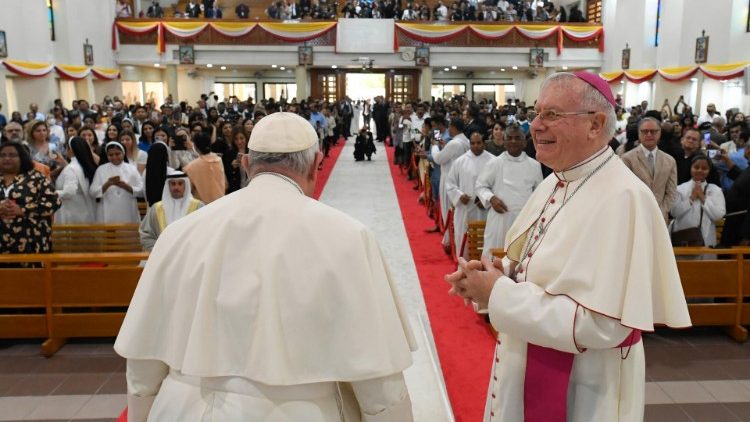 In addition to the liturgy, and celebrating Mass, “the source and summit of Christian life,” the Pope said, “it is important that we spread the joy of the Gospel through a lively pastoral outreach, especially to young people and families, and through fostering vocations to the priesthood and the religious life.”

“We cannot keep Christian joy to ourselves,” he noted, saying, “It multiplies once we start spreading it around.”

He urged those present to let the Holy Spirit comfort and restore them and he encouraged them to be guardians of unity, who are credible and ready to engage in dialogue.

This encounter marked the last public meeting of the Pope prior to his departure from the Middle Eastern Gulf nation, to encourage the Muslim-majority nation’s small, but fervent Catholic flock.

The Pope expressed his delight to be “in the midst of this Christian community that clearly manifests its “Catholic” face,” with a “universal face, a Church made up of people from various parts of the world who come together to profess our one faith in Christ.”

He noted that some present were from Lebanon, and assured them, all peoples suffering in the Middle East, of his prayers and closeness to their “beloved” country, which has been “so weary and sorely tried.”

Pope Francis concluded by invoking the maternal intercession of the Virgin Mary, whom, he noted, “I am happy to venerate as Our Lady of Arabia.”

Finally, before praying the Angelus at the end of the meeting, the Pope again urged everyone to pray for peace, especially in Ukraine and Ethiopia.