Pope calls for protection of civilians as ‘Imperative and Urgent Obligation’

During his weekly General Audience in St. Peter’s Square, Pope Francis lamented “the dramatic news concerning the fate of the people of Aleppo.” Francis described Aleppo as  “an already martyred city, where everybody is dying”, adding that he feels united in suffering with the people of Syria through prayer and spiritual closeness.

After a ceasefire collapsed last week, rebel-held areas of Aleppo were heavily bombarded again, in what has been reported to be one of the worst attacks of the more than five-year war.  At least 96 chil 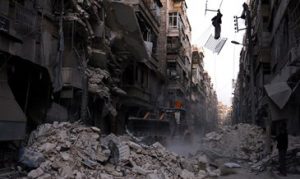 dren have been killed and 223 injured in eastern Aleppo since Friday, children’s charity Unicef said.

Aleppo’s dire humanitarian crisis has been compounded by government shelling in the rebel-held east, which destroyed the area’s two largest hospitals on Wednesday. “The warplane flew over us and directly started dropping its missiles on this hospital…at around 4 a.m.,” a doctor who works as a radiologist at the largest trauma hospital in the sector said. “The rubble fell in on the patients in the intensive care unit.” The bombs also hit the hospital’s oxygen and power  generators. Medical workers at the M10 hospital said patients had to be transferred to another hospital in the area. Two patients died in the attack which also injured three staff members.

Adham Sahloul, a spokesman for the US-based Syrian American Medical Society which supports the two hospitals, said the two attacks took place at the same time, suggesting they were deliberately targeted. As a result of the bombing the heavily damaged facilities are no longer able to function, adding to the city’s critical lack of medical services. 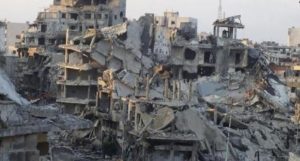 Pope Francis departed from his prepared text to appeal directly to those responsible for the bombing, warning them that they will be “accountable to God” for their actions.

“In expressing my deep sorrow and lively concern for what is happening in that already battered city – where children, the elderly, the sick, young and old, all are dying,” the Pope said, “I renew my appeal to everyone to commit themselves with all their strength to the protection of civilians as an imperative and urgent obligation.”