PERU: Improving living conditions is not only a question of economics – Amélie de La Hougue

Improving living conditions is not only a question of economics

The evangelisation of the suburbs has priority in Peru, says Marco Mencaglia, head of the Peruvian section of the pontifical foundation Aid to the Church in Need. He was interviewed by Amélie Berthelin – de La Hougue on the occasion of the upcoming visit of the pope planned for January 2018

How would you describe the situation of the church in Peru today?

In order to describe the situation of the church in Peru, one needs to take into account the great geographical diversity of the country, which is made up of urban and mountainous regions as well as forested areas. Achieving unity is probably the challenge that has top priority. The Peruvian church is still developing and the local clergy has yet to take on full responsibility for the pastoral care in several dioceses. Forty-seven percent of the bishops are from foreign countries and 57% of these are members of a religious order. The only other country in South America with a similar situation in Bolivia. Truly positive evangelisation experiences have been made in difficult environments. What is given is the treasure of a people with a very active religious spirit. However, two crucial challenges remain for the church in Peru: the pastoral care carried out by communities of faith must be strengthened and a mature faith must develop

In which area is the church most active at the moment? 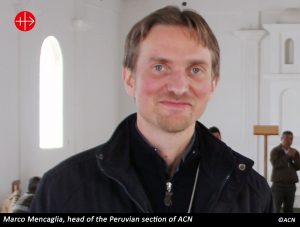 A clear priority lies in the evangelisation of the suburbs of large cities. Millions of citizens are leaving the mountains and the metropolises of Lima and Arequipa are constantly growing. This trend can be seen in every regional capital city, albeit on a smaller scale. For this reason, the church must not just focus on the direst of social conditions, but also form a community out of the families who have come from different parts of the country and often do not have time to get to know each other because of their work.

In other regions on the peripheries of the country, in the most remote villages 4,000 m above sea level or in the middle of the Amazon region, the service of the church continues to be of prime importance in reaching thousands of small communities. A single parish often provides pastoral services to more than fifty of these small communities, and a visit from a priest or sister is an event of great magnitude.

In 2016, Peru was consecrated to the Sacred Heart of Jesus and the Immaculate Heart of the Virgin Mary. What was the reason for this consecration? Was this the wish of the president? Was it a significant moment for the country? For the church?

This consecration was the result of an initiative of the president during the annual meeting of Christian politicians to discuss Christian issues. This “National Prayer Breakfast” is a tradition that has been imported from the United States. In the US, this is an event that every president since Eisenhower has attended. President Kuczynski, who worked for many years as an economist in the United States, decided to participate in this event in Peru. He is the first president of the country to do so. For this reason, the “consecration” in this context is to be seen as an individual statement that was part of a political discourse and did not take place during a celebration or in the presence of representatives of the Catholic church.

Furthermore, the political party of the president does not exhibit a Christian standpoint on such issues as abortion or same-sex marriage.

Church and sects: do evangelicals play an important role in religious life in Peru? Is this a “threat” to the church?

During my travels in Latin America, it was my impression that there was always a strong sense of affiliation to the Catholic church, one that was often based on the popular veneration of saints and traditional feast days. Interestingly, in several of the more remote regions, I saw that these traditions were able to survive for centuries in spite of a very weak official presence of the church. However, at the same time, evangelical sects are making headway, especially in those areas where the church is no longer able to maintain a presence. This is apparently the case in the aforementioned suburbs, where the dizzying growth in population makes it impossible for the Catholic church to maintain a constant presence.

Indeed, population growth is a factor that must always be taken into account in Latin America. In Europe, the optimal objective is maintaining the current number of clerics and pastoral helpers; this, however, is not nearly enough for Latin America. About 32 million people are currently living in Peru. The population has grown by 170% over the last 50 years. In France in the same period, there has been a growth in the population of about 30%.

Therefore, the greatest challenge for the Catholic church is to re-establish contact with the communities, to come together with families and people in places where its presence has disappeared over the course of time.

Over the last few years, Peru’s economy has grown; do you see a corresponding improvement in the circumstances of the Peruvians?

Economic growth is not taking place equally in the various regions of the country: these differences are due to the vast geographic diversity of Peru and are the cause of a constant and ongoing internal migration to the suburbs of large cities. The rural areas are hardest hit, with their population leaving in search of better opportunities in the most important cities of their respective regions.

An improvement in personal economic circumstances does not automatically go hand in hand with an improvement in the development of the people themselves. This is especially evident in the continuously expanding gigantic suburbs of Lima, Arequipa and other large cities in the country. In many families, parents leave their children home alone all day to go work at jobs located far away from their homes. This sad reality leads to uncontrolled growth in the number of gangs, drug trafficking and crime. As was the case in a number of other Latin American countries, improving the living conditions of the inhabitants of Peru is more than just a matter of economics. In this respect, of course, the church can make an important contribution.

Aid to the Church in Need (ACN) has granted 145,000 euros to support more than 650 candidates for the priesthood in 20 seminaries in Peru. One of the projects that Aid to the Church in Need is funding on the Altiplano involves the construction of a convent for the Sisters of the Most Holy Trinity. The foundation provided emergency relief for families after the floods of January 2017.