Khushpur is the largest Catholic village in all Pakistan, sometimes jokingly referred to as the “Pakistani Vatican”. It is around 25 miles (40 km) south of Faisalabad and was first established in 1902 by Belgian missionaries. At that time there was absolutely nothing here, no medical care, not even any roads let alone electricity or telephone communications. The area was teeming with snakes.

Yet over the course of time this place, with its almost 8,000 Catholics and its extraordinarily active Church life, has become so to speak the backbone of the Catholic Church in Pakistan. To date, the Catholic community here has produced no fewer than two bishops, 35 priests, 100 religious sisters and a number of religious brothers. There is one school, one church and one Dominican convent.

Khushpur is also the place from which Shahbaz Bhatti came, the 42-year-old Catholic Minister for Minorities, who was murdered on 2 March 2011. He was in his car on his way to work when he was ambushed by masked men and cut down by machine gun fire. It was in revenge for his efforts to oppose the notorious blasphemy laws in Pakistan. His killing was later claimed by a group close to the Taleban. He is now buried in his home town and his grave is still scattered with rose petals to this day. Just three weeks after his murder, the Pakistani bishops’ conference officially applied to the Vatican to have him included on the list of Martyrs of the Universal Church. In the very last interview he gave, Minister Bhatti had described his commitment as a “witness for Christ”. 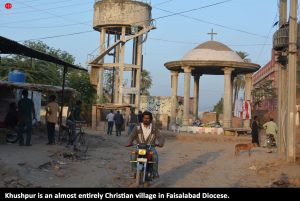 Also in Khushpur, since 1952, is the St Albert’s National Training Centre for Catechists and the adjoining literacy centre which serve the whole of Pakistan, supported by ACN. Since 1965 it has been run by the De La Salle Brothers. To date more than 900 catechists have completed their training here, and at the present time there are 42 men still undergoing their three-year training. They come from all over Pakistan, and after graduating they will return to their home dioceses and serve the Church there. Given the vast size of so many of the parishes in Pakistan, which often comprise several different and not infrequently widely scattered villages, the catechists play an important, not to say vital, role in the transmission of the Faith. For the priests are too thinly spread and cannot possibly be everywhere at once.

However, despite its importance for the Catholic Church in Pakistan, the village of Khushpur is comparatively remote and difficult of access and still suffers to this day from the poor infrastructure. Hence a car is essential for many reasons, including transporting catechists to the doctor or to hospital in the event of sickness or accident, obtaining vital supplies, and of course taking the catechists as part of their training to the various local parishes, where they complete the practical part of their studies. The ancient and rundown vehicle currently used by the centre is a permanent drain on costs, since it is very thirsty on fuel and in constant need of repairs. So Brother SajidBasir, the director of the centre, has turned to ACN for help. We have promised him 12,000 Euros.