With over a thousand dead, and many more in great need, the Church has mobilised to help victims of flooding in Pakistan. Two bishops contacted ACN to explain the situation, and the foundation has committed to helping with projects in Hyderabad and Karachi, two of the dioceses in Sindh province, the most affected one by the catastrophe.

The local Catholic Church in Pakistan is doing what it can to help the victims of the monsoon floods that have devastated large parts of the country over the past weeks.

As the official death toll tops 1,500, with several thousand more injured and more than six million people directly affected by the worst flooding in the past 30 years, urgent aid is needed to prevent the aftermath of the rains from being worse than the flooding itself.

The situation in the diocese of Hyderabad is tragic, according to information sent to ACN by bishop Samson Shukardin. All 19 parishes in the 22 districts of the Sindh province are severely affected by the flood. “Thousands of families are surrounded by flood water and thousands are sitting by the roadside with improper facilities. They have no food, no clean drinking water, no shelter, no latrines and no health facilities. The children suffer the most. Consumption of contaminated water is causing diseases, and the mosquito menace is causing different skin diseases and malaria in the communities affected by the recent floods”, the bishop says. 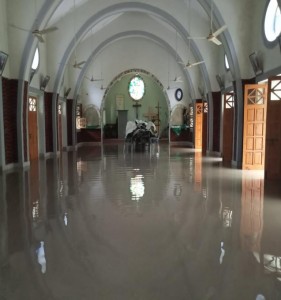 RAIN WATER IN NAWABSHAH INSIDE THE CHURCH

Many of the families have taken refuge in local churches as their houses have been flooded with rainwater, but many of the Churches are also flooded, which has caused damage to Church buildings and community centres in the diocese”, claims Bishop Samson, adding that he has been fielding calls from priests and laypeople all over the diocese, asking for help. He felt the Church had to act swiftly and reached out to ACN.

In response to this catastrophe, ACN is sending emergency help to enable the diocese of Hyderabad, to provide emergency aid to over 5000 families, in the form of food packages for one month, cash grants for the most vulnerable families, mobile health units, temporary shelters and even basic – but essential – items such as mosquito nets and repellent. Damaged churches and community infrastructure must be repaired to shelter victims of the flooding. At Bishop Samson’s request, ACN committed 200 thousand euros of emergency help.

A further 30 thousand euros will go to the diocese of Karachi, which has prepared a response that includes the provision of 310 food packages and kitchen sets, made up of staple foods and essential cooking and cleaning items, to help local families whose houses have been destroyed, or rendered uninhabitable during the current crisis. 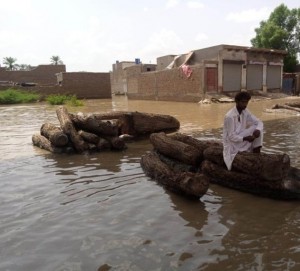 “The floods all over Pakistan have sent a wave of death and destruction which continues to take lives and devastate the country. From the heights of the Himalayas to the shores of the Arabian Sea, floods triggered by heavy rainfall continue to wreak havoc, destroying livelihoods and sweeping away entire settlements, leaving death and misery in their path”, explains Archbishop Benny Travis, of the diocese of Karachi, in a message to Aid to the Church in Need (ACN).

“People are living under open sky, their houses damaged; floods have cut roads, commodity supply chains are badly disturbed; the risk of outbreak of diseases is imminent due to stagnant water and more rains forecasted.”

Through this aid, ACN is also answering the request of Pope Francis, who has called on the international community to respond swiftly to the situation in Pakistan, assuring the local population of his solidarity and prayers.