Night of Witness highlights the importance of religious freedom

Night of Witness highlights the importance of religious freedom

The plight of Christians persecuted for their faith was the focus of prayer, song and reflection at the Night of Witness held in Malta, organised by Aid to the Church in Need  (ACN) Malta.  People filled the chapel of the Good Shepherd convent in Balzan on Friday, 16th June for an event that highlighted the importance of religious freedom.

The Night of Witness began with a Welcome speech delivered by Chairman of the Board of ACN Malta, Mr Joseph Croker. Fr Ziad Hilal S.J. then gave a Community Blessing to those present.

ACN’s National Director for Malta, Stephen Axisa, spoke about religious persecution in Pakistan and the Middle East. He mentioned the names of  priests and religious who had been kidnapped and those who had been killed for their faith, concluding with a memorable quote: “As Fr. Werenfried van Straaten, Aid to the Church in Need’s founder, said about Christian martyrs ‘They are being tested in faith, we are being tested in love’.”

Two guest speakers with close links to countries where Christians are persecuted played central roles in raising awareness of ongoing acts of religious oppression in those regions with the aid of videos and audio-visual presentations. 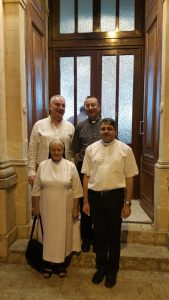 The first speaker was Sr. Frances Farrugia O.P., a Maltese nun, professional social worker and a trained nurse who has spent over 30 years in Pakistan, tending to the spiritual and material needs of the minority Christian community and the wider population. She gave a moving testimony of the daily struggle of Christians in that country who live in constant fear of terrorism and false accusations of blasphemy, which carries the death penalty. Sr. Farrugia O.P. also spoke about the pastoral care delivered by the Sisters and their initiatives to improve the healthcare and education of local people, especially women, which are partly funded by ACN.

Fr. Ziad Hilal S.J., ACN’s co-ordinator for humanitarian projects in Syria and Lebanon, was the second guest speaker. Fr. Hilal gave a first-hand account of the terrible problems civilians are still experiencing in Syria, particularly in Aleppo and Homs, based on his experiences of working with internally displaced families there. He gave details of several humanitarian aid projects in the country funded by ACN to help those affected by the war. These include food parcels, medical aid, provision of water and electricity in Aleppo and a community kitchen in Aleppo that provides 10,000 free meals a day for destitute Christians and Muslims.

Interspersed with the speeches were a series of short videos about the persecuted Church produced by Aid to the Church in Need. The videos explored themes of persecution and its causes. Hymns were also sung by the congregation.

At the end of this occasion the Rev. Prof. Hector Scerri delivered the following reflection:

Fr. Hector’s reflection was focused on the striking impact of the name given to the event of prayer and awareness, NIGHT OF WITNESS. He stated that when he reflected on the title, the first thoughts he experienced were about important episodes about the word “night” in Scripture and in the Liturgy. He mentioned four particular and inspiring nights: (1) the night, we read about in Genesis, when the patriarch Jacob — with great perseverance and determination — wrestled with the angel of God at the Jabbok.

From the following morning, Jacob became “Israel”. From this episode we learn the determination which marks the Lord’s servants; (2) the night we read about in Exodus when God’s chosen People, under the leadership of Moses, were saved from Egyptian bondage and experienced freedom. In the episode, we recall that it is the Lord who is the source of authentic freedom, the freedom to which we are all called as sons and daughters of God; (3) the night at Bethlehem which marks the Nativity of the Incarnate Son of God. This is the holy night of Christmas which reminds us that the Lord becomes man in simplicity and humility; (4) the night when, every year, we celebrate the Easter Vigil, the vigil of all vigils in the Christian calendar. This sacred night reminds us that with the Risen Christ we are all called to make the passage from darkness to light, from sin to grace, from slavery to freedom.

Fr. Hector then referred to a particularly poignant scene from the book The Night by Elie Wiesel, a Jew who experienced the horrors of the concentration camps during World War II and who saw his whole family executed. Wiesel, who received the Nobel Peace Prize in 1986, passed away late last year. The scene mentioned by Fr Hector describes the cruel death at the gallows of two adults and a young boy. The latter agonizingly suffered a protracted execution. He suffocated very slowly. Someone among the bystanders cried out: ‘Where is God?” Someone else, in the crowd, exclaimed: “God is dying, there, on the gallows!”

God participates in the suffering of humanity. God suffers with suffering Christians in all parts of the world. It is our duty, as disciples, to intercede for the suffering Church and to show solidarity in manifold ways. St Paul’s words from Romans 8:31-39, proclaimed earlier at the encounter, are indeed encouraging words. “What will separate from Christ?” Nothing will separate us from Christ, even if we have to suffer. This is our call. As disciples, we are one with Christ, and one with our suffering sisters and brothers.