NIGERIA – How can human lives be so casually terminated? – Archbishop Kaigama

“How can human lives be so casually terminated?”

At major festive periods in Nigeria, the prices of animals skyrocket because they are slaughtered for social entertainment. Human life is however, sacred and cannot be sacrificed as if it were mere animal life, for pleasure or social celebration. God alone is the Lord of life from its beginning until its end: “no one can under any circumstances claim for himself the right directly to destroy an innocent human being” (cf. CCC 2258). 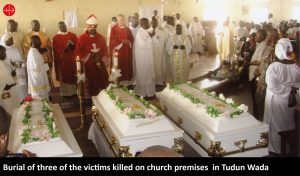 My Christmas homily at the Jos prison where I spent the Christmas (as I have done in the last sixteen years) with over one thousand prison inmates and after them with the IDPs and Sant’ Egidio Community at the camp of the Internally Displaced People in Bukuru, was consistently on the need for all Nigerians to be positive, and to look into the New Year with hope and faith in God. At the Mass of New Year on January 1st, I also preached on the need to always show gratitude to God, correct the mistakes of our past and to value our civil leaders for little acts of mercy we get from their programme of political governance. I reminded Nigerians of the need for hard work and patience.

I, however, woke up this morning feeling depressed and angry and this is almost a contradiction to the spirit I had asked people to avoid in the New Year. Many questions propped up in my mind as to our safety in our country; if enough is being done to protect us; how long the hunger I see written on the faces of many widows and children/youths will last? What of the inflation that has made life so miserable? What about the reckless and needless killings? How can human lives be so casually terminated with pictures of dead bodies, decapitated or disfigured corpses shown in the social media?

It is a great pity that the younger generation in Nigeria is growing with an unfortunate impression that life is very cheap and can be taken away at the whims and caprices of anyone or group provided that it meets the narrow religious, ethnic, political or even criminal aspirations of such a person or group. How long shall killings, associated with demented or irrational reasoning, continue to be witnessed in Southern Kaduna before a concerted effort is made to stop such carnage permanently? Instead of worrying that lives are lost, no matter how few, the Inspector General of Police is arguing that not many lives were lost as claimed by the statement issued by the Catholic Diocese of Kafanchan. When will one Nigerian life matter or must people be killed in their thousands or millions before we realize the humungous damage done to our people?

We have had rough, tough and bad times when innocent Nigerians lost their dear lives as is being experienced now in Southern Kaduna. Before now it was Agatu, Madagali, Gwoza, Yobe, Plateau, parts of Taraba, Nasarawa, Anambra, Abia and other parts of the country and where next? A culture is developing that does not seem to know the difference between the lives of human beings and those of cows, goats, rams, chickens, etc. Are we becoming so sadistic that we do not see that such brutality creates a culture of impunity, chaos, anarchy and doom? For the slightest misunderstanding whether on religious, political or ethnic grounds some Nigerians are ready to engage in the gruesome murder of fellow Nigerians!

As if the needless killing by Boko Haram is not enough, we are now evolving a culture of brutality unparalleled in the history of this nation. The Nigerian civil war was a monumental disaster which was responsible for the loss of millions of innocent lives. The Maitatsine crisis took hundreds of lives, the Miss World contest controversy resulted in the loss of lives just as the Sharia crises created not only serious inter religious tension but also so many lives which were lost; the Niger Delta militants/avengers bomb at will and destroy the nerve centre of our economic survival while discontented groups continue violent agitations of all kinds. This results in the use of force by security agents and many times extrajudicial killings are recorded. While we are grateful for the many ways our security agents have sacrificed their time, energy and sometimes lives to protect and defend us, we are not unmindful of the brute force sometimes used as some of them see the weapons they hold as a licence to molest those they are supposed to protect with such weapons. Armed robbers and kidnappers have not spared us moments of tranquillity either. Criminals attack and get away with all sorts of murders and destruction, in most cases never traced. Doctors are allowed to go on strike until thousands die in hospitals as a consequence before the government realizes the need for an amicable settlement! Our roads, most of which are often constructed in a substandard manner due to corruption and compounded by zero maintenance culture, are theatres of death especially during festive periods. The question is how, who and what can stop all these violence and anomalies? Is our Intelligence gathering effective? Are there sufficient modern equipment to fight crime? Is it true that some Security agents are polarized along religious and ethnic lines which make fighting crime very difficult? Or that some fifth Columnists exist among security agents who give information to criminals!

Not too long ago we had the decency in our country to condemn infanticide, abortion, suicide, killing of twins, tribal wars, etc. We pontificated that female genital mutilation, human trafficking, prostitution, etc violate the dignity of the human person. Now, we do not seem to worry about any form of indignity against persons as life is brazenly taken sometimes as religious slogans are shouted!!! How reprehensible! What happens to our so-called notoriety for being a religious people and nation?

May God save Nigeria and plant in us this New Year the fear that taking human lives should not be done by anyone who practises a civilized religion. Human lives should rather be used to build more meaningful and dignified lives. Our Scriptures tell us that God created man and woman and asked them to increase and multiply and fill the earth, not to depopulate it by acts of violence.
What is mind boggling is the seeming insensitivity to the killings. Does it not trouble us that the international community is watching Nigeria with great apprehension? How do we convince them otherwise or attract investors? We have problems identifying the criminals. Some say they are foreigners or they are those politicians who lost (or won) elections or they are Fulani herdsmen or foreign marauders (from only God knows where) yet we do not hear of culprits being arrested and punished to serve as a deterrent to others.

I believe that the deafening silence of Mr. President and his team is not because silence is golden. Is it because they have run out of plans or ideas to protect the people? It is surprising that Mr. President can rush to Gambia to rescue them from attempted political suicide or show lively interest in the political affairs of Guinea Bissau, yet maintain an unhealthy silence over the Southern Kaduna crisis. We know that the President has bucket full of problems. What about the lingering problems of the IDPs who are still languishing? I know from my encounter with them that even though Mr. President means well for them, help does not reach them effectively and in a coordinated manner. Those who summon the courage to return to their villages have neither homes nor means of livelihood to return to. Yet we hear of the millions being misappropriated by those charged by government to bring succour to these traumatized and wounded people. Where is our sense of compassion or empathy?

The casual and deliberate manner lives are being taken right now in Southern Kaduna and many other troubled areas of our nation is tantamount to a declaration of war against helpless and innocent Nigerians. The authorities must not dilly dally or keep procrastinating in proffering a well-thought out response to these acts of savagery.