NIGERIA Is government complicit in the supply of arms to Islamists? – ACN UK

Is government complicit in the supply of arms to Islamists?

Bishop accuses authorities of inaction in face of “wave of terror”

A Bishop has accused the authorities in Nigeria of suspected supply of arms to an Islamist terrorist network who he claims have infiltrated federal and state governments. Bishop Joseph Bagobiri of Kafanchan, Kaduna state, northern Nigeria, said he believed that the government has done little or nothing to stem “a wave of terror” by Islamist Fulani herdsmen against Christians and others which he estimates has claimed the lives of 1,000 people within the last year. 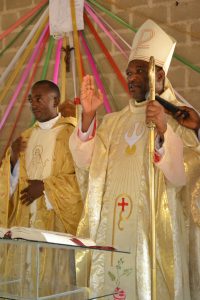 His comments come after an attack on worshippers gathering for an Easter Vigil service outside a church in Asso village, near Kaduna, who were set upon by Islamist Fulani herdsmen in an incident on 15th April that claimed 12 lives – 10 of whom were Catholics.

Describing the Fulani extremists as a “sister organisation” to terror group Boko Haram, Bishop Bagobiri gave an exclusive message to Aid to the Church in Need, the Catholic charity for persecuted Christians, stating that, in spite of the many sightings of the Easter Vigil attackers, no arrests had been made.

He said: “Given the sophisticated nature of the weapons used in the [Islamists’] operations, it is suspected that their kin in government and the military are able to supply these arms to them.

“Fulanis are in charge of customs, immigration and ministry of internal affairs in Nigeria today. Therefore it is easy to bring dangerous weapons through our borders with no one to prevent this.

“When [the] weapons are discovered, they are often turned over to the police and other security agencies and nothing will be heard about such weapons again.

“Again, government at both the state and federal level is headed by Fulanis and they seem to be more sympathetic to the aggressors and killers than to the vulnerable victims.

Bishop Bagobiri’s comments to ACN follow a homily, given at the funeral of some of the victims of 15th April Easter Vigil atrocity. He spoke out about the impact of international extremism in Nigeria and elsewhere: “The Fulani Herdsmen terrorists and their sister terrorist organisations are operating in the world today…The jihadists established themselves… through the use of force that often goes with mass murder of innocent and vulnerable persons.”

Of the Christians killed as well as those displaced in Nigeria, he said: “This is exactly what the Fulani jihadists are doing today in southern Kaduna, the middle belt region and now with incursions into both the south-east and south-west of Nigeria.” He said: “The number of deaths seems to be rising every day with mass graves littered all around us.”

The bishop noted that the Fulani terrorists’ strategy and resources used in the latest attack included a getaway vehicle and “sophisticated weapons” to kill Christians gathering to pray. In the homily, he said: “We can see that there is a well hatched and heavily funded programme of systematic elimination.” His sermon called on the government to reverse the Islamists’ alleged gerrymandering which the bishop claims is a vote-rigging policy foisted on the people to exclude Christians.

He said: “the delineation of constituencies and siting of polling units which was arbitrarily and fraudulently carried out in the past to ensure rigging from the source in favour of one section and religion in Kaduna state must be revisited and corrected using both the geographical and numeric data that were ignored.”

Bishop Bagobiri called the “Fulani Herdsman Terrorists…the third deadliest terrorist organisation in the world today.” Appealing for prayers for peace and the attacked Christians, the bishop also asks the charity for support, he said: “Please find a way to draw the world’s attention to this menace of the Fulani Herdsmen terrorist activities.”

Aid to the Church in Need is helping persecuted Christians in Nigeria – supporting the victims of atrocities, providing Mass stipends for poor and persecuted priests, helping with repairs to church buildings and vehicles for clergy ministering in remote regions.