NIGERIA: Bringing consolation and hope to victims of terror

Many of the victims of Boko Haram are still refugees in their own country and face daily trauma and anxiety. The danger has not passed, but the Church is bringing them consolation and hope.

“I don’t want there to be any night-time. I wish it was always daytime. My nights are full of fear, anxiety, nightmares”, says Naomi, a young Nigerian woman, an internal refugee. Like so many of her fellow compatriots in northeast Nigeria, Naomi relives the same nightmare every night: being abducted, the terrorists storming her town, forcing her to “marry” a Boko Haram terrorist or witnessing one of the extremist insurgents murdering someone in her family…

“I get frightened as soon as night falls”, this young woman confesses. She is just one of more than 30,000 internally displaced Nigerians in Pulka, close to the border with Cameroon and around 75 miles (120 km) from the city of Maiduguri, the capital of Borno State in northeast Nigeria.

Similarly, Charles, a young father of a family who is 33 and a refugee in the same place, also admits to having recurrent nightmares. “I relive the time when we were living in hiding. Since the terrorists used to attack by night, we would get out of the town as soon as night began to fall and hide in the bush. Many nights I still dream that I’m in hiding”, he explains to Aid to the Church in Need (ACN). 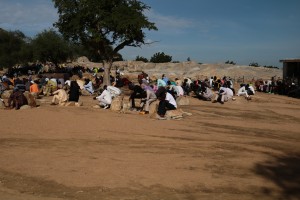 Both are now living next to the Alpha refugee camp in Pulka – just one of the 20 refugee camps scattered across Borno State and one of six in the Gwoza district alone.

Boko Haram attacks changed the lives of Naomi and Charles completely. Muslims are a majority in Borno State, and in Gwoza they represent almost 90%, but Naomi and Charles are Christians. It was a little over 50 years ago when the first Catholic missionaries came to Borno, bringing the Faith, and with it the first schools. They helped

bring development to an abandoned people. But the terrorist Boko Haram group also had a definite agenda, and one of its objectives was to do away with the Christians and with education.

Without their faith, many people would have not been able to endure so much suffering, explains Father Christopher, a Catholic priest from the diocese of Maiduguri who is ministering to the refugees. “First of all they tried to frighten them and threaten them, trying to force them to convert. Then they began to get more violent. The priests had to hide and sleep in the mountains, but the insurgents of Boko Haram continued to harass and persecute the people. If they converted, they would not be hurt, people were told”. 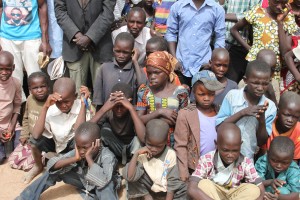 “It is important to me to do everything I can to help these people”, Father Christopher explains. He continues to minister to the refugees, but he himself is living in an abandoned house, since Boko Haram destroyed the church and the presbytery in Pulka in 2014.

“Life in Cameroon was so difficult that we thought we would never hope again. Father Christopher is a source of inspiration for us. When we are really down, he gives us courage. He is a true father to all of us and is trying to fill the gaps in our lives left by our missing family members, because many of them were murdered. He cares for us as if we were his own family. God is providing and helping us, thanks to so many people around the world who have not forgotten us. We pray that God may give strength to all these benefactors and that you may be able to continue doing your work and supporting us”, says Naomi

ACN is seeking help for a number of different projects on behalf of the uprooted people of Pulka, who include around 14,000 Catholics. Among these are a borehole to provide water for the refugees, the rebuilding of the Saint Paul’s parish house in Pulka, so that Father Christopher can return to live there, and help for 23 catechists who are working among the refugees from Pulka, both in Nigeria and in Cameroon.