NIGERIA: Abducted four years ago, young Leah Sharibu is a symbol of the persecution of Christians

She was kidnapped on Saturday, the 19th, precisely 1461 days ago. Young Leah Sharibu was just 14 years old when she was taken by gunmen belonging to the terrorist group Boko Haram from her school in Dapchi, northeast Nigeria.

In that attack in February 2018, terrorists took 110 girls with them. However, about a month later, all the students were released except for Leah, who, being the only Christian in the group, refused to convert to Islam as the terrorists demanded. She has been in captivity ever since.

There is not much information about her health and whereabouts. The most recent information that ACN obtained from Gideon Para-Mallan, very close to Leah’s family, indicates that she is alive. “ This is the most encouraging information,” said this Pastor.

Leah’s parents, Nathan and Rebecca Sharibu, meanwhile issued an appeal, released recently by the Nigerian press, in which they ask the country’s leaders to “speed up the release” of their daughter, simultaneously launching a request for help to General Farouk Yahaya, army chief of staff, who recently assured that he would release the Christian girl.

There are unconfirmed rumors that the young woman has given birth to at least one child and that she was “forced to marry a Boko Haram leader”, according to an official from the Leah Foundation, an institution in the meantime created in support of her release.

In the last contact he also established with ACN, Pastor Gideon, who has sought to meet with the young woman’s family with some frequency, said that Leah’s parents remain “firm and full of faith that one day they will see her daughter” at liberty. “Their state of mind has not changed, but they are suffering…” 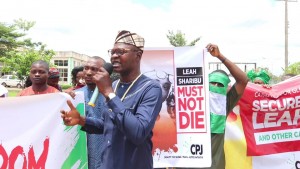 The request for the release of Leah Sharibu has mobilized numerous human rights defense institutions, expanding the calls in this sense that ACN has promoted since 2018. Among these institutions, the United States Commission on International Religious Freedom has denounced also this case as an example of a flagrant violation of the rights of the Christian community in Nigeria.