Boko Haram militants have released 21 of the 270 girls abducted two years ago from a school in Chibok, north-east Nigeria. The abduction was part of Boko Haram’s fight to establish a fundamentalist Islamic state in the region, drawing global attention to the jihadist insurgency. According to local reporters, Boko Haram dropped the girls at a location for the military to pick them up. A child born to one of the girls and believed by medical personnel to be about 20 months old also was released, according to the Nigerian president’s office. 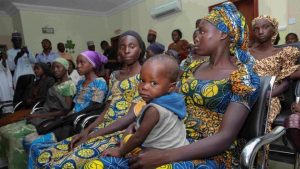 “The girls were brought to Kumshe, which is 15km from Banki where a military base is stationed, in ICRC (International Committee of the Red Cross) vehicles,” said a local source.
From Kumshe, the Chibok girls were immediately taken by military helicopter to Maiduguri, the capital of northeast Borno state.

Many of the kidnapped students were Christian but had been forcibly converted to Islam during captivity. During an emotional Christian ceremony in the capital Abuja, one of the girls said they had survived for 40 days without food and narrowly escaped death at least once: “I was… [in] the woods when the plane dropped a bomb near me but I wasn’t hurt.

“We had no food for one month and 10 days but we did not die. We thank God,” she added, speaking in the local Hausa language. Another girl said: “We never imagined that we would see this day but, with the help of God, we were able to come out of enslavement.”

The freed girls were initially held by the Department of State Services, Nigeria’s intelligence agencybefore being handed over to Vice President Yemi Obinsajo.  It took days for most of the girls’ families to reach the capital , but there were shouts, kisses and cries of joy when the released girls met their families after more than two and a half years.

One parent said: “We thank God. I never thought I was going to see my daughter again but here she is… Those who are still out there – may God bring them back to be reunited with their parents.” 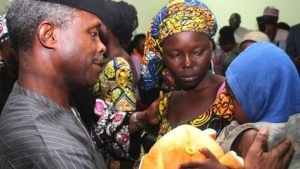 Another girl’s mother said that Boko Haram abducted her daughter and hundreds of other schoolgirls, because “they did not want them to succeed in life” adding, “By God’s grace she is back,” she said. “She will go back to school. Boko Haram has no power again.”

Eleanor Nwadinobi, women and girls manager at the Nigeria Stability and Recognition Programme, said the girls will now undergo treatment including trauma counselling and health and nutritional care. “It is important that they are not attended to in isolation,” she said. “They will need individual attention as the needs of one girl will differ from the other.”

There are conflicting reports but one security official said that four Boko Haram commanders were freed in exchange for the girls. It was also reported that a ransom of millions of dollars  was paid by the Swiss government on behalf of the Nigerian government.

However, the Nigerian government has denied any prisoner swap. Vice-President Yemi Osinbajo said: “Absolutely, there was no exchange of any kind”  though, perhaps significantly, he did not rule out exchanges in the future, saying the government would “consider all options available”.

“The release of the girls, in a limited number, is the outcome of negotiations between the administration and Boko Haram brokered by the International Red Cross and the Swiss government. The negotiations will continue,” said President Muhammadu Buhari’s spokesman  Garba Shehu. He added that a splinter branch of Boko Haram is now willing to negotiate the release of another 83  girls: “The faction said it is ready to negotiate if the government is willing to sit down with them.” 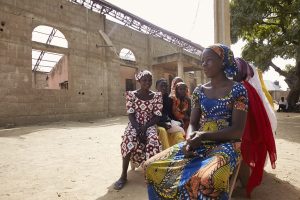 Nigerian government representatives have been hampered in their negotiations  for the release of the schoolgirls because of splits within Boko Haram which has fractured into two – possibly three – factions over the issue of links with Daesh. The Chibok girls are being held by former Boko Haram leader Abubakar Shekau, who appears to have lost out in the power struggle. From a position of weakness, he perhaps concluded he had nothing to lose by releasing some of the girls.

Following the latest release of 21 girls,  about 190 Chibok girls are still thought to be held by the militants. 57 girls escaped immediately after the raid by jumping off trucks. Few details have emerged of the ordeal of the abducted girls, many of whom are believed to have been taken as wives and systematically raped. Others have been forced to carry out demanding physical tasks. After more than two years in captivity some of the girls married off to Boko Haram fighters do not want to go home.

In May Amina Ali was found with her  child, said to have been  fathered by a Boko Haram member she married,  in Sambisa forest close to Boko Haram strongholds. Amina told her mother that some of the other girls had died in childbirth, while others had been killed or deafened by bombs. Amina has since been held in a house in Abuja for what the state has called a “restoration process”. She said in August that she “just wanted to go home” but she still loves and misses her husband.

Thousands of other people were abducted by Boko Haram during its seven-year insurgency in north-east Nigeria, but the Chibok girls brought worldwide attention to the group. News of the girls’ abduction inspired a global campaign with the Twitter hashtag #BringBackOurGirls that was endorsed by many celebrities including the US first lady, Michelle Obama.