Highlights of the Apostolic  Visit

Pope Francis landed in Yangon  on 27 Nov for the first phase of his third tour of Asia, to Myanmar and Bangladesh. He visited two cities in Myanmar before moving on to Dhaka in Bangladesh, where he stayed till 2 Dec.

Pope Francis said his aim in coming to Myanmar was to minister to its Catholic community, which numbers around 660,000 people, or just over 1 percent of the population of about 52 million. His visit is significant not only because the country has a small Christian minority, but also due to a contentious political situation that has roots in both a recent regime change and an ongoing crisis over the minority Rohingya Muslim population.

Speaking from the capital of Naypyitaw on the first full day of his visit, the Pope 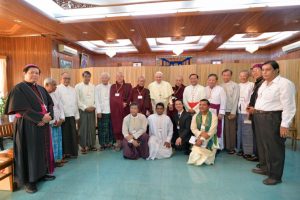 noted how justice is historically understood as “a steadfast will to give each person his due,” and is often viewed as “the basis of all true and lasting peace.” In a major speech to the nation’s leaders, he urged them to leave conflict behind and work for peace by promoting justice and respect for the rights of all citizens, regardless of religion or ethnicity. “The arduous process of peace-building and national reconciliation can only advance through a commitment to justice and respect for human rights,” the Pope said.

On the second day of his Apostolic Journey to Myanmar, the Holy Father met with the religious leaders of Myanmar in the morning at the Archbishopric of Yangon where he stayed. His address to the group of Catholic bishops focused on three themes:

Cardinal Charles Maung Bo expressed his country’s joy at the papal visit: “We are today transported to a mountain of bliss. Life will be never same to Catholics in Myanmar.” He added “Just a year ago, the thought that this little flock will be breaking bread with our Holy Father Francis would have been just a dream.” 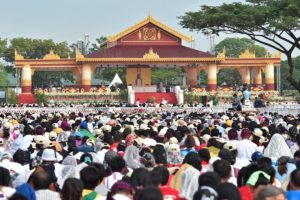 rwards, the Pope celebrated Mass at Yangon’s Kyaikkasan Ground park. About 150,000 people turned out for the Mass, some bearing flags from Thailand, Cambodia and Vietnam. The majority were “Burmese faithful of all ethnic groups gathered in the ancient capital from the whole country.” Delegations from Cambodia, the Philippines, Vietnam, and Thailand, as well as Buddhist and Muslim representatives,  took part in the Solemn Mass. The Church of Cambodia organized a four-day pilgrimage to Yangon for 126 Cambodians, of which 10 were seminarians, three priests, four missionary priests and 10 women religious. Burmese Catholics had to apply to attend through their local churches to enter the park venue, and many dressed in matching outfits or with hats bearing the pope’s image. Pope Francis preached a message of forgiveness during the Mass, urging Myanmar’s long-suffering ethnic minorities to resist the temptation to exact revenge for the injustice they have endured.

After Mass, in the afternoon the Pope went by car to the Presidential Palace in Naypyidaw, the country’s capital. An official welcome ceremony was held in front of the Palace with hymns, military honors and the introduction of delegations. Then the Pope had a private meeting with President Htin Kyaw in the Palace’s “Credentials Hall. The Pope wrote in English in the Guest Book: “I invoke upon all the beloved people of Myanmar the divine blessings of justice, peace, and unity.”  He gave the Head of State a manuscript of the Apostolic Vatican Library containing the story of Malalankaravatthu, the life of Buddha in seven episodes, in images and in Burmese.

After his meeting with the President, Pope Francis was received by 1991 Nobel Peace Prize laureate Aung San Suu Kyi, who has

visited the Vatican several times, at the Myanmar International Convention Centre of Nay Pyi Taw. The State Counsellor of the Republic of the Union of Myanmar welcomed Pope Francis to Myanmar with an address.

“Myanmar has been blessed with great natural beauty and resources, yet its greatest treasure is its people, who have suffered greatly, and continue to suffer, from civil conflict and hostilities that have lasted all too long and created deep divisions,” the Holy Father told the Authorities, leaders of civil society and members of the Diplomatic Corps who were gathered in the Centre.

“As the nation now works to restore peace, the healing of those wounds must be a paramount political and spiritual priority,” Pope Francis stressed. “I can only express appreciation for the efforts of the Government to take up this challenge, especially through the Panglong Peace Conference, which brings together representatives of the various groups in an attempt to end violence, to build trust and to ensure respect for the rights of all who call this land their home.” The Pope noted that peacebuilding is an “arduous process” and that national reco

nciliation “can only advance through a commitment to justice and respect for human rights.” He pointed out that in this effort “Myanmar’s religious communities have a privileged role to play.”

During a Mass for Youth at St Mary’s Cathedral in Yangon Pope Francis urged the young people of Myanmar to share the good news of Jesus Christ. “Whatever your vocation, I urge you: be brave, be generous and, above all, be joyful!” Francis concluded. “Like Mary, may all of you be gentle but courageous in bringing Jesus and his love to others.”

On the third day of his visit to Myanmar, Pope Francis left the Archbishopric of Yangon and went by car to the Kaba Aye Center, one of the most venerated Buddhist temples of South East Asia. The Minister for Religious Affairs and Culture, T 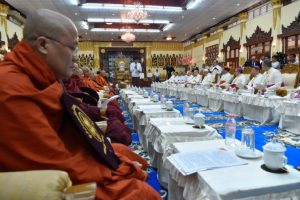 hura U Aung Ko received him on his arrival. The Pope met the monks of the Sangha Maha Nayaka State Committee, who represent the highest authority of the Buddhist clergy of the country, in a large hall at the complex. In his address to the “Sangha” Supreme Council, Francis appealed for the healing of the country’s wounds, without being resigned in face of the challenges or isolated, but ensuring “that each voice be heard.”

“Unity in Diversity” was the main theme of Pope Francis’ Apostolic Journey to Myanmar said Greg Burke, Director of the Holy See Press Office at the end of the visit. “Unity also for this small Catholic Church and for the role it plays in the whole society . . . and the unity of working together, with the Buddhists . . . for peace and for respect of dignity,” he added, stressing the Pope’s appeal for respect of the rights of all the ethnic groups.