The small Catholic community of Mongolia had cause for celebration on the occasion of the ordination of Fr Jose Enkh-Baatar, the first priest to be ordained from this region. Celebrating his first Mass on Sunday 28 August, Fr Enkh-Baatar said: “This Mass, the Eucharistic liturgy is for me a much bigger gift yet. Now I hope to walk in the path indicated by the Lord and do His will. “

The young man was ordained in the Cathedral of Saints Peter and Paul located in Ulaanbaatar, the same church where he celebrated his first Mass. Fr Enkh-Baatar’s ordination was presided over by the Apostolic Prefect, Bishop Wenceslao Padilla; Mgr Lazarus You Heung-sik, bishop of the South Korean diocese of Daejeon where Enkh studied and the Nuncio in Korea and Mongolia, Mons. Osvaldo Padilla.

More than 40 priests concelebrated, among them were some Consolata missionaries and Brother Modesto, who came from the Archdiocese of Naples on behalf of Cardinal Sepe. Over 1,500 faithful and guests attended, including representatives of the government and city authorities and diplomats. Among those present was Enkh mother, who hugged her son and said it was “an honor”. 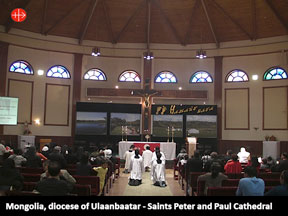 The Mongolian people are divided between traditional shamanism and Tibetan Buddhism, and aspects of the two religions often collide. With the Christian community, however, relationships are less close, and the ordination of Enkh represents a bridge in this regard.
The Dambajav abbot, who is in charge of the Buddhist monastery of Dashi Choi Lin also attended the ordination Mass. He gave the young priest a khadag [a traditional Buddhist scarf] in blue: the color was chosen because it represents the sky and therefore purity, but is also a symbol of auspiciousness and an invitation to compassion. The audience applauded when the abbot placed the scarf on Enkh’s shoulders. The Abbot’s Secretary said: “We have good relations with Catholics, we learn from them as much as they learn from us. We are happy that one of us, a Mongolian, has become a priest of this church. “