A Colombian religious missionary, who was released recently in Mali, nearly five years after she was kidnapped by Islamic militants, has said faith and prayer helped her survive her ordeal.

Sister Gloria Cecilia Narvaez Argoti of the Congregation of the Franciscan Sisters of Mary Immaculate was abducted on February 7, 2017, and was freed on October 9 this year, following months of negotiations involving the Holy See and the Colombian bishops. The following day, she was in Rome and attended the papal General Audience. 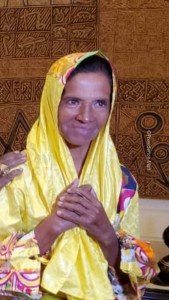 Mali, October 2021
Sister Gloria after her liberation from jihadists linked to Al-Qaeda who held her captive for more than 4 years.

Speaking to Vatican News, she recounted her experience and thanked God as well as the Church, Pope Francis, and the Italian authorities for their help in securing her release. During her captivity, the Colombian Church and her religious Congregation prayed constantly for her, calling international attention to her case.

Sister Narvaez told Vatican News’ Fr. Manuel Cubías she had a “good humane relationship” with her kidnappers based on reciprocal respect, though she felt she was treated like a stranger because of her religious status and Catholic faith: “They always repeated that Islam was the true religion. I let them speak with respect, but I could perceive they rejected me for being a Catholic and a nun”.

She said she never feared for her life, as she trusted in God: “I said to myself: ‘What will be, will be’.”   Praying and reciting the Psalms, she added, helped a lot and gave her a sense of security. She said her first thought after her release was to thank God with all her heart.

Talking about the work her Franciscan Congregation did at the time of her kidnapping, Sister Narvaez explained that it managed a health care centre for the people of the various villages in Mali’s district of Karangasso, ran an orphanage housing dozens of children whose mothers died in childbirth, and offered literacy, embroidery and sewing classes. The Franciscan sisters also dealt with micro-credit for small businesses, especially those run by women, so that they could contribute to keeping their families. “Our Congregation hasn’t been present there for some months now, but, with the exception of micro-credit, we have been allowed to continue these activities  through local women under the supervision of the local diocese”, she said.

Over the last years Church missionary activity in Mali, as in other countries in the Sahel region, has been hindered by growing insecurity due to a jihadist insurgency.  Militants linked to al Qaeda and the Islamic State have expanded their reach in the semi-arid region on the edge of the Sahara, fueling ethnic conflicts and forcing entire communities to flee their homes. Just over a year ago,  Italian Catholic Missionary Fr. Pierluigi Maccalli, a member of the Society of African Missions, was released in Mali, two years after he was abducted by a jihadist group in Niger.