The bill seeks to incorporate parts of the Islamic penal code, or “hudud” into Malaysia’s existing legal system. At present criminal cases in Malaysia are currently handled by federal law. Shariah courts, which come under the jurisdiction of each state, are restricted to family law covering issues such as divorce and inheritance.

Proposed punishments are far stricter than those currently meted out in the civil courts – a jail sentence of 30 years, 100 strokes of the cane and a fine of more than $22,000. PAS supporters say the amendments will enhance the status of the Islamic courts and deter wrongdoing.

For decades, PAS has urging for the adoption of hudud in the northeastern state of Kelantan which it governs. PAS maintains that it is the responsibility of the country’s Muslims, who account for 60 percent of the 30 million population, to support Islamic law. PAS presented the bill in parliament last year but later withdrew it in order to fine tune the legislation. It is now expected to be reintroduced in the next parliamentary session in March.

Prime Minister Najib Razak backs the contentious bill despite the anger of members of his own United Malay National Organisation (UMNO) ruling coalition. Najib, who is currently embroiled in a corruption scandal, may be hoping that flourishing his Islamic credentials will boost his chances in national elections that must be held by August 2018. 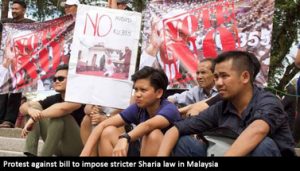 Christians and other religious minorities are concerned that the bill could pave the way for full implementation of hudud, which prescribes punishments such as amputations and stoning. About 100 people attended a small counter-rally to protest against the bill organised by Bebas, an NGO that upholds equality, opposes racial discrimination and advocates religious freedom in Malaysia.

A protester at the counter-rally said “This process of Islamisation should stop…. We want to tell the government it’s time do a stock-take [and assess] the impact of this on our country – not just for the non-Muslims but the Muslims too.”

Opponents of the bill argue is not only incompatible with Malaysia’s multiethnic and multireligious society, but in breach of the country’s secular constitution. Bebas stated. “The so-called ’empowerment’ of the Shariah Court will only exacerbate the unequal treatment of Muslims and non-Muslims before the law.”

The opposition Democratic Action Party, which used to be in coalition with PAS, has reiterated it will reject the amendments – the version of the bill tabled last year led to the collapse of the opposition pact. Members of parliament from the Borneo state of Sarawak, which has a large Christian population, will also reject the proposals.

Presidents of three parties representing the Chinese and Indian ethnic groups in Najib’s ruling Barisan Nasional (BN) coalition have threatened to quit their cabinet posts if the bill passes.