LIVING THE GOSPEL AMID FLYING BULLETS 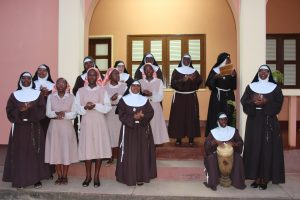 In the midst of war the Poor Clares Sisters stayed together with their people.

The Angolan War of Inde­pendence (1961–74) freed the country from its co­lonial Portuguese rulers but immediately plunged it into a 27 year long civil war (1975-2002). The civil war spawned a disas­trous humanitarian crisis, internally displacing one-third of Angola’s total population and seeking to eliminate the Church from the public sphere and from society.

ACN has worked to help the church in Angola rebuild, serve and accompany the country’s Catholics. At the heart of this reality, the contemplative Poor Clare Sisters of “Nossa Senhora dos Anjos” have a particularly important role to play as they pray for peace and healing and the revival of faith in a coun­try where so many people, families, communities are still scarred by war.

In addition to the spiritual du­ties of the contemplative life, the Sisters make baby clothes and religious items for sale in order to bring in a little addi­tional income for the convent, otherwise they live from alms and our support. The monas­tery has a long story with ACN.

The Poor Clare Sisters in Malanje, have lived through a number of battles during the civil war that destroyed so much in Angola. Mother Maria del Carmen Reinoso has shared heroic stories with us. 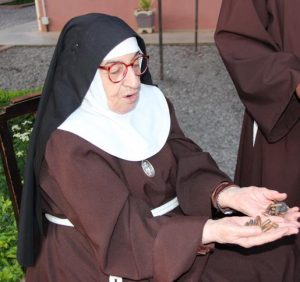 “It’s a miracle that we’re still alive, but we weren’t hit by a single bullet.” Angola’s civil war was one of the longest and bloodiest on the continent, and the early ‘90s was the most violent period of all. During one of the phases during which the convent was attacked, Mother Maria tells us how the Sisters had to hide in their bread oven in order to take shelter from the terrible hail of bullets that were being fired. The walls were rid­dled but the Sisters saved!

Their convent chapel is today one of the places where the faithful could gather during last year’s Jubilee Year of Mercy as there was one Door of Mercy, something which brought great joy to many.

The Poor Clares in Angola are a living example of merciful and heroic love and their mission and charism are so essential in a country which only just has started to heal.