LEBANON: “Thanks to ACN, these families are going to breathe a little again.”

On the outskirts of Tyre, the ancient coastal city in southern Lebanon where Jesus preached, life now has become one of impoverishment, as it has for most of the population of Lebanon.

“For two years, our country has been in a terrifying economic crisis. Our families are living in great distress,” Maronite Archbishop Charbel Abdallah of Tyre explained. Most people’s “salary only allows them to live for two days.”

Lebanon’s financial meltdown has been characterized by the World Bank as one of the worst worldwide since the 1850s; nearly 80% of the population now lives in poverty. With soaring inflation, basic needs, even for the previously middle class, have become out of reach.

The value of the currency slid further to record levels the week of Jan. 10, triggering another rise in the price of bread, this time by more than 25%, and two consecutive increases in the cost of fuel. A fill-up for a standard car now exceeds the monthly minimum wage.

“We cannot ignore the hunger of the people,” Archbishop Abdallah stressed.

Battered by decades of corruption and mismanagement, Lebanon has no social assistance from the state to help the poor, so the church has stepped in to fill the void. Like many other Catholic leaders, Archbishop Abdallah established economic committees in his parishes to address the needs of parishioners and has reached out to international organizations for help.

“The most generous is Aid to the Church in Need (ACN),” the archbishop said. 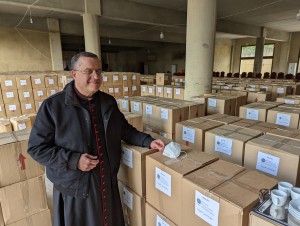 Lebanon
Archbishop Charbel Yusef Abdallah, Archbishop of Tyr (Maronite), in the warehouse where the food packages were stored for the distribution.
LEBANON / TYR-MAR 21/00044
Food packages for needy families for 8 months – 2021/22.

ACN has funded food boxes for 1,500 of the neediest families of 20 parishes in the Maronite Archdiocese of Tyre, in a predominantly Muslim area. Each box contains cooking staples. With the currency depreciation, the $40 value of the contents is equal to three months’ salary for those earning the national minimum wage.

Families will receive a food box every two months for eight months.

As volunteers loaded food boxes onto pickup trucks for the first distribution, the archbishop expressed his gratitude for the help recieved and said, “The families are going to breathe a little again.”