During his two-day visit to Ireland for the occasion of the World Meeting of Families, Pope Francis’ had to confront and deal with the scandals that cast a shadow over the papal visit. He repeatedly apologised on behalf of the Church and pledged action to resolve serious issues afflicting the Church, particularly those regarding misuse of power and abuse of children and vulnerable persons by priests and religious organisations. 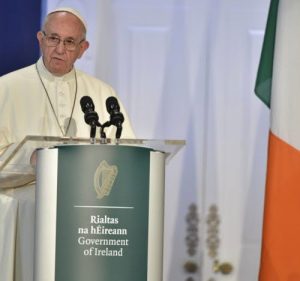 On arrival at Dublin International Airport, Pope Frances was taken to the Presidential Residence. After a Welcome Ceremony in front of the main entrance of the residence, Francis had a private meeting with the President. He then met with the Authorities, civil society and diplomatic corps in Dublin castle. ‘With regard to the most vulnerable, I cannot fail to acknowledge the grave scandal caused in Ireland by the abuse of young people by members of the Church charged with responsibility for their protection and education’ he told those present.”

The Pope then visited Dublin’s historic Pro-Cathedral of Saint Mary’s. “Our world needs a revolution of love!’ he said in his address to 350 married and engaged couples gathered there.  Afterwards, he met with homeless families at the Capuchin Fathers’ reception centre. In the afternoon, Francis attended the Festival of Families at Croke Park stadium in Dublin. On the second day, Pope Francis went to Knock,  a beloved pilgrimage site for the Irish. He  expressed his joy in visiting the Marian shrine: “I’m happy to be here with you in Mary’s home.” After passing through the large crowd which had gathered despite the rain in his popemobile, Francis went to Chapel of the Apparitions, where over 200 faithful were gathered.  He was welcomed by the Rector of the Sanctuary, Father Richard Gibbons. After silently praying before the Madonna in the chapel, the Pope left a golden rosary for the Virgin, saying “I know how important the tradition of the family rosary has been in this country.” 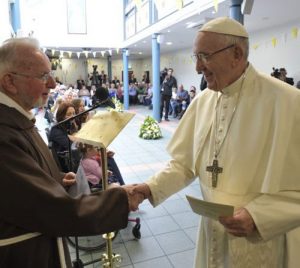 At the end of his two days in Ireland, during the final Mass at the 9th World Meeting of Families, on August 26, 2018, in Phoenix Park in Dublin, Pope Francis made an unprecedented prayer. Speaking in Spanish, he apologised for the abuses, the silence and cover-ups of abuses that have been a scourge for the Church. In particular, he mentioned sexual abuse by clergy; exploitation of minors at work by institutions run by religious men and women; preventing single mothers whose babies were forcibly taken away from them and  their children from trying to find each other by telling them it was a ‘mortal sin.’

During the Penitential Rite, the Pope asked pardon “I would like to put these crimes before the mercy of God and ask forgiveness…. May the Lord preserve and grow this state of shame and repentance, and give us the strength to commit ourselves to work so that it never happens again and for justice to be done.” 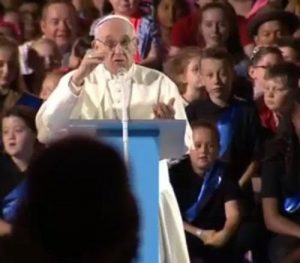 In his homily, Francis spoke about the beauty of families and the need to stay strong in the faith, saying each new day “brings the promise of a new Pentecost, a domestic Pentecost.” He emphasized, “How much our world needs this encouragement that is God’s gift and promise!” The Pope urged those present to share Jesus’ “words of eternal life” when they returned home and become a source of encouragement to others.

At the end of the Mass, Cardinal Kevin Farrell announced that Rome would host WMOF 2021 for the five-year anniversary of the publishing of Amoris Laetitia.

Before Flying Back to Rome, Pope Francis met the Bishops of Ireland at the Dominican Sisters’ Convent. “It is in the dark night that the light of faith shines purest in our hearts. And that light will show the way to the renewal of the Christian life in Ireland in the years ahead” was his parting message to Irish bishops.