Various photos sent by Stephen Rasche, a solicitor of the Chaldean Catholic Archdiocese of Erbil, to the international Catholic pastoral charity Aid to the Church in Need (ACN), document the presence of extremists from European countries among the ISIS fighters. The photos show graffiti written in German and were taken in Batnaya – a small town on the Nineveh plains, 15 kilometres from Mosul. According to Father Steven Esam, a priest working there at the time, approximately 850 Christian families were living there when it was taken over by terrorists in August of 2014. 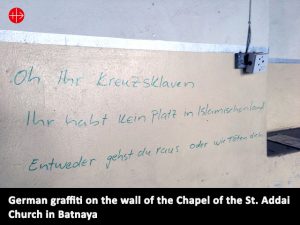 In the inscriptions, the Christians are reviled as “Slaves of the Cross” and threatened with death. And they proclaim: “This country is Islamic country, you dirty ones, that you not belong in.” And a further inscription declares: “Either you leave, or we will kill you.” The inscriptions partly written in bad German are on the walls of the chapel of St Addai in Batnaya. Obviously it was not written by a native speaker of German, so the rational conclusion is that these were immigrants to Germany (or a German speaking country) who then went and joined ISIS.

Stephen Rasche commented on the pictures in his letter to the pontifical foundation Aid to the Church in Need: “The most important thing is to show the great degree of destruction in order to be able to understand what has happened and just how dangerous it still is to return. Furthermore, by showing the destruction and desecration of our holy places, I would like to communicate to the world just how much dread and fear our own people are feeling right now when they have to decide whether they would later like to return.”

Further pictures were taken in the neighbouring city of Karamles (also Karemlash, Karamlash, Karemles, Karemlish), approximately 29 kilometres southeast of Mosul. The pictures illustrate the brutal actions of the terrorists. Apart from the churches that were desecrated and reduced to ruins and the broken and mutilated statues of the saints, Aid to the Church in Need was especially shocked by the desecration of the grave of a Catholic priest. Stephen Rasche explained, “The grave of one of our priests was dug up and the corpse removed. We found his vestments and the lid of the coffin, but there was no trace of the corpse.” The Catholic pastoral charity learned that the deceased was Salem Ganni, a priest who passed away in 2009, a relative of the 34-year-old priest Ragheed Ganni, who was shot dead in Mosul in 2007.

Aid to the Church in Need has been supporting the Christians in Iraq since 2014 with more than 20 million euros in aid for emergency relief projects, education, food and the livelihoods of displaced persons.

The German graffiti on the wall of the Chapel of the St. Addai Church in Batnaya (Batnayah) in Iraq. If you look at the picture of the Chapel showing the yellow walls, with the desecrated statue of Mary in the middle, you can see the same graffiti and see exactly where it was. Iraq Batnaya Inscription made by ISIS on the walls saying in German: You … slaves of the Cross, we will kill you all” and “This country is an Islamic country. Your Dirty, you don’t belong here” Batnaya is an chaldean town in northern Iraq located 14 miles north of Mosul and around 3 miles north of Tel Keppe. All of its citizens fled to Iraqi Kurdistan after the ISIS invasion on August 6, 2014. On October 20, 2016, Peshmerga and chaldean forces drove ISIS out and occupied the town.

Batnaya used to be called “Beth Madaye” meaning the “House of the Medes” where it’s believed that a group of the Medes who followed the chaldean monk Oraham (Abraham) settled there around the seventh century. It’s also believed that Christianity reached Batnaya around that time.

Batnaya was attacked by the army of Nader Shah in 1743 who destroyed the village extensively and is believed to have killed half of its inhabitants.

In the past Batnaya used to be famous for making matting from the reeds its people used to cultivate in the valley of al-Khoser river. Currently, some of its inhabitants are cultivating different kinds of crops while others are involved in non-agricultural trades.

In 1944 the Mar Qeryaqos Church was built on the ruins of a monastery by the same name believed to have been built early 15th century. A second but smaller church Mart Maryam was built in 1966, while the church of Mar Gewargis was mentioned in an inscription dating 1745.

In Batnaya are several inscriptions, one dating to 1545 by Darweesh bin Yohanan from the village of Aqreen is entitled “Prayers for the Dead”, another one is a complete bible inscribed in Syriac by the priest Ataya bin Faraj bin Marqos of Alqosh dating 1586.

As with all the other currently chaldean villages that belong to the Chaldean Catholic Church, Batnaya’s chaldean used to follow the Church of the East until the sixteenth century, when the efforts of the Catholic Church came to fruition and the Church of the East was divided. However, as is the case with all the other villages of the Nineveh Plains, Catholicism did not gain ground till around mid 18th century.

During the 17th and 19th centuries, the town had about 900 chaldean; in 1995, the town grew to about 3,000 people. Prior to the emergence of ISIS, it exceeded over 6,000 people. All the people in the town are chaldean and belong to the Chaldean Catholic Church.

In 2007, because of the growth of the town, Sargis Aghajan built 25 new model houses near the Mar Oraha Monastery, which is beside the town. The Provision of municipal services to the village and monastery through the supply of two tractors for harvest & agriculture, and a dumper to collect garbage as well as employment of labourers to clean the access roads in the village. The village is under full control of “Peshmerga”.