“We are still afraid”

During a visit to the international headquarters of the pontifical foundation Aid to the Church in Need (ACN), the Syrian Catholic archbishop of Mosul, Yohanna Petros Mouche, deplored the fact that Christians were still afraid of returning to their villages, despite the liberation of the Nineveh plains. He said that it was “unclear” who would ensure their safety in the liberated villages and that he felt “betrayed” by the government.

Despite the fact that ISIS is “finished” militarily and has been driven out of the region, the ideology of the fanatic Muslims remains, the archbishop explained. Thus, in October, two days after the central Iraqi government had passed a ban on alcohol for the entire country, a Christian who had been dealing in alcohol was murdered by fanatic Muslims in Qaraqosh. The bishop said that Christians were also “shocked” to discover that about 75 per cent of the houses in the liberated Christian villages had been burnt down by local inhabitants.

“Why did these people, with whom we were associated, do this? We ask ourselves whether this was their way of telling us that they will burn us to death if we return,” the archbishop said. “We are afra 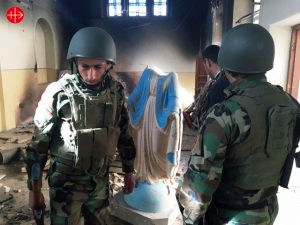 id that we will have to continue to live with these people. We impatiently awaited liberation, and many wanted to return immediately, but first there need to be guarantees for our safety.”

The archbishop, however, also emphasised that it is a “great joy” that, now after liberation, there is at least the possibility that Christians could return to the Nineveh plains and “continue to bear witness for Christ in our own country.”

Archbishop Mouche thanked all benefactors of Aid to the Church in Need and asked them for continued support. “We ask that these people keep showing solidarity with us and support us with their prayers and material aid so that we may continue to bear witness.”

During the Advent and Christmas season, the aid organisation is asking for support for Christian minorities in need in Syria, Iraq and Lebanon to make it possible for them to remain in their homelands.

Aid to the Church in Need has set up a homepage to provide information about what is happening to Christians in Syria and Iraq, present successful projects and issue invitations to prayer and requests for donations: