In the weeks after Iraqi forces recaptured Qaraqosh, near Mosul, some displaced Iraqi Christians have returned to their former villages to see what is left of their homes and churches. Christianity in northern Iraq dates back to the first century AD. The minority gradually fled the violence after the 2003 overthrow of Saddam Hussein. When Islamic State arrived, many abandoned their homes and fled to Kurdistan. 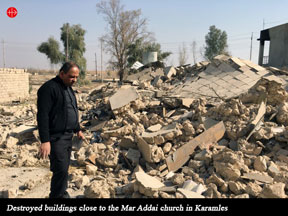 For decades, the Immaculate Conception Church in Qaraqosh was the heart of Iraq’s largest Christian town. After two years under Islamic State rule, it lies scarred and desecrated. More than a month after Iraqi forces regained Qaraqosh, the church’s spire cross still hangs at an angle, its inside is blackened by fire and its walls daubed with Islamic State slogans.

In the church’s inner courtyard, Islamic State fighters set up a shooting range for target practice and the yard’s walls are pockmarked with  craters. When IS were driven out they left behind bullet-riddled female mannequins and hardboard figures. Empty shell casings litter one end of the courtyard along with torn hymn music sheets. A badly damaged wooden pulpit lies at the other end, now with a small pink “Hallelujah” flag posted on top.

A clean up has now started at the Immaculate Conception, one of several damaged churches in the town centre. “Perhaps they should leave it like this and people visit and see what Islamic State did,” said Aram Alqastoma, a student who came from a nearby Christian enclave in Iraq’s autonomous Kurdish region with friends to help clean up the church. “They destroyed everything. And it destroyed my heart to see this.”

Mass has been held again in the Immaculate Conception for the first time in two years and Christians who lived there are visiting to see what remains. On one wall black IS graffiti still reads: “Islamic State is here to stay despite the Crusader coalition thanks to the blood of our martyrs.” Nearby someone has scrawled a defiant reply: “Jesus remains in our hearts.”

The army retook Qaraqosh in late October as part of the campaign to recapture nearby Mosul, Islamic State’s largest Iraqi stronghold, two years after the group swept across the north of Iraq. Walls in the town centre are sprayed with “NPU” – the 500-strong Christian paramilitary brigade Nineveh Plains Protection Units that protects Qaraqosh under the auspices of the Iraqi army. The NPU is funded by the central government and gets its weapons from the Iraqi army.

General Behnam Aboush, who helped form the NPU to fight for Qaraqosh, said Christians would return to their towns and villages only if Christian forces provided security rather than Iraqi Arab or Kurdish forces like before, and if they had some guarantees of international protection. “Always we have lost our land. We will stay if we guide our own security,” he said.

But even victory against Islamic State and the possibility of a permanent Christian force in the town will not be enough for many. Mechanical diggers sit ready in the town centre to help rebuild, and main streets have been cleared of rubble but many of its shops are burned out and ransacked. Water or electricity have yet to return.

Families come briefly to Qaraqosh to check on burned out homes and collect belongings from a town that was one of the earliest sites of Christianity. But few think of returning for good to Qaraqosh, which once had 50,000 residents but is now all but a ghost town.

Alhan Mansour returned for a second time to pack more clothes and her son’s toys from the family home into their car. Her sister’s home was used by the militants and later destroyed, she said. But memories are too much now.

“We’re going to emigrate. We just came to see our home and our memories, it’s too sad,” she said before driving away. “It’s hard to leave your memories, but I don’t trust living here anymore.”