Just a few miles away from the ongoing horrors of war, two ordinations in Iraqi Kurdistan last Friday were a cause for great celebration among the local Christian community. They offer hope not only of survival but rebirth for Christianity in the Middle East. Patriarch Louis Raphaël I Sako, Archbishop of Baghdad, who performed the ordination entirely in Aramaic, called it “a great sign of hope in a time of great crisis.” 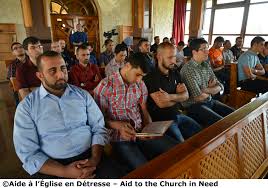 Two young men were recently ordained Chaldean Catholic Church priests in Ankawa, Erbil- Joachim Sliwa and Martin Baani. Sliwa is in his late twenties, married with a young daughter. He emigrated from Iraq to Germany ten years ago in his late teens, has served as a deacon in Munich and will be serving dispersed Chaldean Catholics in Berlin.

Baani, 26, unmarried, became an internally displaced person when is invaded  Karamles, his hometown southeast of Mosul, in August 6, 2014. He escaped with only clothes, passport and the Blessed Sacrament he rescued from his church. Martin’s family emigrated to San Diego and he was invited to stay with them and be ordained in the Chaldean diocese there. However he chose to return to Iraq and serve internally displaced persons who want to stay, not emigrate, and rebuild their Christian communities. After further training with the Patriarch in Baghdad, he expects to be assigned to Dohuk though his wish is to eventually become pastor in a liberated Karamles.

The ordinations  took place in the new, monumental, air-conditioned church of Our Lady of Perpetual Help in Ankawa. Over 500 people attended and a youth choir of 20 sang sacred songs to eastern melodies and rhythms. A group of 20 permanent deacons and acolytes of the archdiocese chanted liturgically. Also present were ecclesiastical dignitaries, bishops, Orthodox and Catholic, Chaldean and Syriac, populated the sanctuary, including Ramzi Garmou, Chaldean archbishop of Tehran; Nicodemus Sharaf, Orthodox Syriac Metropolitan whose cathedral is in Mosul, himself an internally displaced person; and  the Chaldean Catholic archbishop of Ankawa, Bashar Warda. 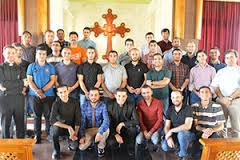 The rite of ordination took place at the beginning of the service. Sako, smiling, anointed the ordinands’ hands. They received new stoles and were vested. The two new priests kissed the altar, kissed the baptismal font, embraced each other and then their own and one another’s families, who were weeping with both joy and sorrow. The newly ordained Joachim kissed his pregnant wife who, by Chaldean rite rule, had signed her assent to his ordination as part of the liturgy.

In his homily, Sako said he found  a sign of hope in these ordinations, adding “we expect very soon the liberation of Mosul and the Nineveh plain. A priest gives up his life in service and these men are doing that, serving their church as their family. “

The two new priests then concelebrated the Liturgy of the Eucharist with the patriarch and two other priests of the archdiocese and gave communion to the whole congregation. On leaving the church, the new priests were showered with candy and confetti as people applauded, cheered and wept tears of joy.

In the evening the Christians of Karamles held a celebration for Martin’s ordination in an internally displaced person encampment in Ankawa where they live. Food for hundreds was set on trestle tables in an open area; young girls danced and a video slideshow of photographs of Martin’s life was projected on a big white wall and a  specially built scale model of the Karamles church of St. Barbara was displayed.

The Christians of Karamles fled together as a town and still live together in the camp. They all expect to move soon into a new apartment, now being built in the outskirts of Ankawa by the Knights of Columbus.

The next day the church,  with Blessed Sacrament and altar removed, became a packed concert hall for Lebanese soprano Abeer Nehme, who sang sacred songs in Aramaic and Arabic. Ninety members of an archdiocesan young adult choir backed her: “Our faith is strong, we stand firm,” she sang as the audience applauded enthusiastically.

Apart from the ordination and concert, there are many signs that Christianity in Ankawa is surprisingly vibrant and alive. 18 Chaldean Catholic seminarians at St. Peter’s are preparing for ordination. Colored lights and illuminated crosses are displayed everywhere for the festivity of the Holy Cross on 14 September.

An American , Stephen Rasche, is Counsel for the Ankawa archdiocese and Vice Chancellor for external affairs for the nascent Catholic University. As Archbishop Warda’s aide, he often has to confront the notion that Iraqi Christians are a lost cause, practically extinct. In spite of many reasons for pessimism, for him ordination day in Ankawa was one among many vivid indications of Christianity’s survival and rebirth in Iraq.