For three days in Washington, D.C., the first-ever International Religious Freedom (IRF) Summit (July 13-15) brought together more than 30 different faiths to discuss threats to religious freedom around the world. The summit was attended by more than 700 representatives of some 70 NGOs, including Aid to the Church in Need (ACN).

The summit featured an international cast of several dozen speakers from across the political and faith spectrum, all calling for global action to ensure and protect the right to religious freedom, defined as the most fundamental human right. “Religious freedom is the fundamental right to define ourselves in relation to our creator,” said Edward Clancy, director of outreach for ACN in USA; “all other rights flow from this.”

Former Secretary of State Mike Pompeo said that “when people lose the right to freedom of religion, tyranny dominates.” “Let’s be a wall of steel to protect against oppression,” he added, speaking specifically in reference to what he called China’s “genocide” perpetrated against the Uyghur Muslim minority in northwest China. The regime’s persecution of the Uyghur people and its deployment of sophisticated surveillance technology in its oppression of all faiths was one of the recurring themes of the summit. Former Rep. Frank Wolf, architect of the International Religious Freedom Act, condemned businesses and their supporters in Congress that seek access to the Chinese market despite the country’s abuses.

In his closing keynote, New York’s Cardinal Timothy Dolan reminded his audience that religious freedom is violated in 40 percent of the world. “It is the human rights issue of our day,” he said, and “religion is not merely private—international affairs must be considered through the lens of religious freedom.”

Chaldean Archbishop Bashar Warda of Erbil, Kurdistan—ACN’s program partner in Iraq—reflected on the social impact of Christian persecution, which, if unchecked, “eventually takes from [victims] their physical properties, their livelihoods, their security, and in the end, their dignity as human beings. Once this dignity is destroyed, the family and all social stability is destroyed with it. … [the] restoration of dignity requires of international interveners and providers of aid something beyond the mere metrics of dollars spent and projects completed. It requires an honest and sincere treatment of affected people with a simple thing—that is, respect for them as human beings.”

ISIS may be long gone, but old wounds need healing, even as the Christian community in northern Iraq is confronted with fresh threats—economic, social, and even military. 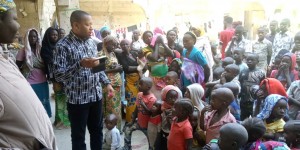 Nigeria, March 2020
Father Joseph Bature Fidelis, meeting with women and children in a camp run by the Diocese of Maiduguri.

High on the Summit agenda was Nigeria, where religious persecution is most severe. Yet the situation finds scant coverage in major media and gets insufficient attention from Western governments. Making the case for US leadership on the issue was ACN program partner Father Joseph Bature Fidelis, a psychologist in charge of the Human Resource and Skill Acquisition Center for Trauma Care in the Diocese of Maiduguri, Nigeria, birthplace of Boko Haram. The Center—designed to help the recovery and social reintegration of victims, mainly female, of jihadist violence—was funded largely by ACN.

According to the Nigeria Security Tracker, Boko Haram has killed more as 40.000 people in Nigeria since 2011. The Global Terrorism Index 2020 ranks Nigeria as the third country most impacted by terrorism, after Afghanistan and Iraq. Beside Boko Haram, the index indicates the Fulani extremists as the most active terrorist group in the country. Father Fidelis, referring to “unparalleled violence,” said that “nowhere else is there this magnitude of persecution.” He questioned the persistent theory that Fulani violence is linked to climate-change related competition for land. The priest asks: “What do resources have to do with the kidnapping of women or the burning down of churches?” What connects Boko Haram, ISWAP (ISIS West African Province) and the Fulani is an “Islamist agenda,” he charges; “religion is a key factor”.

Other testimonies on Nigeria came from Dr. Gloria Puldu, president of the Leah Sharibu Foundation, which works for the release of Leah who has already been held four years by Boko Haram; Joy Bishara told of her ordeal as one of the 276 Chibok girls kidnapped by Boko Haram in 2014—she escaped but 111 girls are still missing. Bishop Matthew Kukah of Sokoto, Nigeria, addressed the Summit as well on several occasions. 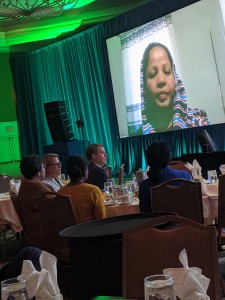 The Summit featured many testimonies from survivors and victims of religious hatred and persecution. An emotional highpoint came with the stories of two witnesses: Irene Weiss described her survival at Auschwitz where she arrived at age 13; she lost her parents and four siblings to the gas chambers; Mariam Ibrahim, a Christian condemned to death, spoke of a year spent in prison in Sudan, charged with apostasy from Islam. Chained to the floor of her cell, she gave birth to a son.

The key organizer of the summit was Ambassador Sam Brownback, who served as US Ambassador at-large for International Religious Freedom under the Trump Administration. In that capacity, he oversaw three Ministerials to Advance Religious Freedom hosted by the US State Department in 2018, 2019 and 2020. The summit, a hoped-for annual event, was funded by several organizations, including the Templeton Religion Trust, the Alliance Defending Freedom, and the Family Research Council.

“Persecution and discrimination because of one’s faith is one of the primary actions of any group seeking to dominate and oppress whether government or extremist. People who defend their right to search for truth and transcendence, and to live according to their principles are an obstacle to those who want to eliminate pluralism. Those who stop searching are very easy to manipulate,” said Marcela Szymanski, the editor-in-chief of ACN’s bi-annual report on Religious Freedom in the World.

In closing, Ambassador Brownback stressed the fundamental objective of the summit: “Freedom of religion for everyone, everywhere, all the time.”