Celebrating Mass at the International Eucharistic Congress in Budapest, Hungary, on Sept. 10, Cardinal Jean-Claude Hollerich said that “faith in Europe has become a very small flame”, praying that the continent would rediscover the missionary dimension of the faith.

“Faith in Europe has become a very small flame, which in some regions of our continent risks slipping away,” the Cardinal said in his homily, delivered in French.

“The faith was carried by cultural structures, the faith entered the soul as if in symbiosis with the world around us. A faith no longer carried by this Christian world becomes at risk of wavering.”

“Faith has a missionary dynamic. Faith demands to be shared with others… I pray with all my heart that this missionary dimension of faith may be rediscovered in Europe.” 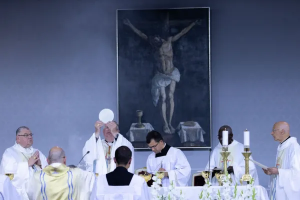 The 63-year-old Jesuit archbishop of Luxembourg was speaking on the sixth day of the 52nd International Eucharistic Congress, which opened on Sept. 5 with a 1,000-strong choir and a Mass featuring First Communions.

The congress was originally scheduled to take place in 2020 but was postponed to 2021 due to the coronavirus pandemic.

The eight-day event culminated on Sept. 12 with a closing Mass celebrated by Pope Francis in Budapest’s Heroes’ Square.

In July, Pope Francis named Cardinal Hollerich, the president of the Commission of the Bishops’ Conferences of the European Union (COMECE), as the relator general of the 2023 synod on synodality.

Following the nomination, seen as a mark of papal esteem, the cardinal will play a key role overseeing the gathering of the world’s bishops in Rome.

In his homily at the Hungexpo Budapest Congress and Exhibition Center, the main congress venue, Cardinal Hollerich reflected on the nature of faith.

“The faith we share opens the Church to the path of a synodality,” he said. “A person alone, a community, and sometimes a local Church, can lose its way on the path of faith.”

“The synodal journey of the whole Church corrects our unfruitful paths, showing us the way that leads us out of the desert.”

He continued: “In the desert of our lives, we are tempted to give up our faith or to reduce it to our own small scale. Our faith must be fed in our deserts. And what food would be more apt to nourish our faith than the Eucharistic food, Jesus himself at the heart of our lives?”

“Again, this Eucharistic food of faith is uniquely personal, yet at the same time eminently communal and ecclesial. If we did not live the ecclesial dimension of the Church, we would cut ourselves off from our roots, who is Christ, and stop on the path that leads us to Him.”

Other speakers at the congress on Friday included Cardinal Dominik Duka of Prague, who recalled that the first International Eucharistic Congress was held in France in 1881 against a background of upheaval and anticlericalism.

He suggested that the present International Eucharistic Congress was also taking place against an unsettled background.

The 78-year-old cardinal, who was imprisoned under communism, said: “The International Eucharistic Congress is a thanksgiving to Christ, a celebration of the One who, uniquely, is able to give his life for others. And this is his victory. I recall the words that united us in our struggle and victory in 1989: ‘Truth and love overcome lies and hatred.’”

Also on Friday, the Hungarian president János Áder, a Catholic, offered a personal testimony. He encouraged congress participants to look for signs sent from God in their lives.