Highlights of Pope’s visit to Chile

Before setting off on his 22nd Apostolic Visit abroad to Peru and Chile, Pope Francis visited Rome’s Marian Basilica of Santa Maria Maggiore to pray for Mary’s protection. As is customary, the Pope sent telegrams to the Heads of States of the countries he flew over.

After receiving a floral tribute from two children in traditional dress, military honors and the presentation of the Delegations, the Pope was taken by car to the residence of the apostolic nuncio where he stayed during his time in the country. On the way Pope Francis made a brief stop at the parish of San Luis Beltrán, of Pudahuel, to pray at the tomb of Mgr. Enrique Alvear Urrutia, known as the “bishop of the poor”.

In his first speech in Chile to the Chilean Authorities and  Diplomatic Corps, the Pope 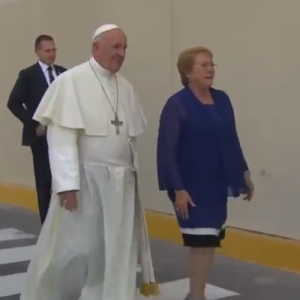 stated that  Chile distinguished itself in recent decades by the growth of a democracy that has enabled steady progress.  In this year marking the two-hundredth anniversary of the declaration of independence Francis said “yours is a great and exciting challenge: to continue working to make this democracy, as your forebears dreamed, beyond its formal aspects, a true place of encounter for all. To make it a place where everyone, without exception, feels called to join in building a house, a family and a nation.” He urged Chile to foster a culture that can care for the earth, and thus is not content with merely responding to grave ecological and environmental problems as they arise.

Referring to the paedophile scandal in Chile which scarred the country and caused tension and protests right up to his visit, Pope Francis in expressed his “pain and shame’” for the “irreparable damage” caused to children by some priests in the Church. He asked forgiveness for these acts and appealed that “every effort” be done to help victims and to ensure that “such things do not happen again.”  He later met privately with several victims of sexual abuse by clergy on Tuesday evening at the Apostolic Nunciature in Santiago. The Vatican spokesman said that the Pope “prayed and cried with them after hearing their experiences.” 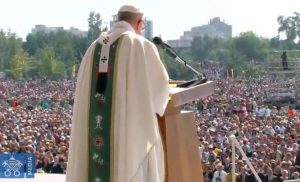 Bachelet, Pope Francis celebrated Mass at the Parque O’Higgins in Santiago. “The Beatitudes are that new day for all those who look to the future, who continue to dream, who allow themselves to be touched and sent forth by the Spirit of God” said Francis in his homily, adding “How much the heart of the Chilean people knows about rebuilding and starting anew! That is the heart to which Jesus speaks; that is the heart for which the Beatitudes are meant!”

In the afternoon he visited a women’s prison. Later he met priests, religious and seminarians in the Cathedral of Santiago. “Make it possible for every disheartened person to encounter Jesus” was the Pope’s message to them. He noted the three important moments experienced by Peter and the first Christian community: Disheartened, shown mercy, transfigured. Afterwards, he had a separate meeting with Chile’s bishops.

In the evening, the Pope privately visited the shrine of the Jesuit saint Alberto Hurtado, who is recognized as a champion of the poor and strong advocate of social justice,and spoke to the Chilean brothers in his order. Hurtado was canonized on 23 October 2005 by Pope Benedict XVI, becoming his country’s second saint.

The next day Pope Francis headed for  Temuco in the Araucanía region, home to a large 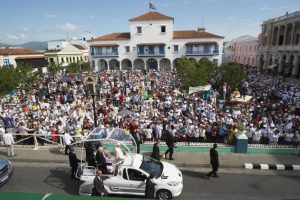 indigenous population including insurgent Mapuche Indians who in recent months have vented their displeasure with the Catholic Church with arson attacks on church buildings. After a Mass at the airport, Francis had lunch with indigenous people in a convent. Then he returned to Santiago, where he had an encounter with young people. met young people in the pilgrimage Maipu. In the evening he gave a speech at the Pontifical University of Chile.

A surprising initiative of Pope Francis on the plane which took him 1,800 kilometers from 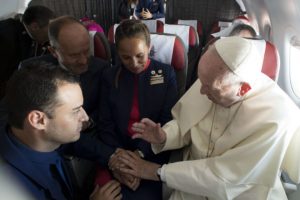 Santiago to Iquique was the blessing of the marriage of two flight attendant and an air hostess in mid-air. The Chilean couple: Paula Podesta Ruiz, 39, and Carlos Ciuffando Elorriaga, 41, had been married civilly for eight years and  have two children: Rafaella, 6, and Isabella, 3. In 2010 an earthquake destroyed the church where they intended to exchange their vows. When they asked the Pope to bless their wedding rings, Francis asked them if they wished to be married religiously. The Sacrament of Marriage is valid, said the Holy See. 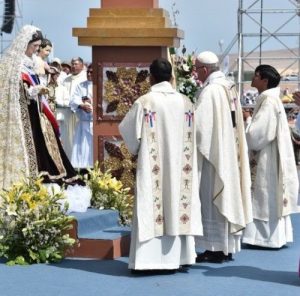 On his  last day in Chile, the Pontiff’s went to the northern port city of Iqique, where he celebrated his final Mass before heading for Peru. He thanked Bishop Guillermo Vera Soto of Iquique “for his gracious words on behalf of his brother bishops and all God’s people” and  President Michelle Bachelet for her invitation to visit the country. He also thanked the civil authorities who worked hard to make this visit possible and “the thousands of volunteers for their selfless and silent work.” Asking those present to pray for him, Pope Francis concluded: “I am grateful for the presence of so many pilgrims from the brother nations, Bolivia, Peru, and please don’t be jealous, but especially Argentinians, because Argentina is my homeland.”

Pope Francis departed from Chile in the afternoon, accompanied to the plane by President  Bachelet.  He was seen off with live music, native dancers and a military honor guard.