Pope Francis arrived in Peru on Thursday evening and was warmly welcomed. The next day, he met with the President, Members of the Government and the Diplomatic Corps Representatives of Civil Society in the Government Palaceʼs Honour Yard. His key message for them was “The degradation of the environment, sad to say, cannot be separated from the moral degradation of our communities.” 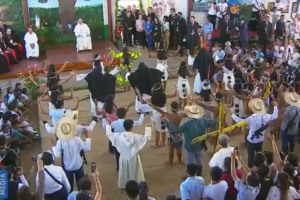 The Pope then flew to Puerto Maldonado where he first visited a Home for Young & Abandoned Children, whom he encouraged to study;“Get an education, take advantage of the opportunities you have for schooling. The world needs you, young men and women of the first peoples, and it needs you as you are.”

Ahead of the 2019 Synod for the Amazon, Pope Francis later told 4,000 indigenous peoples in the “Coliseo Regional Madre de Dios”in the Amazon region of Peru  “I wanted to come to share your challenges and reaffirm with you a whole-hearted option for the defence of life, the defence of the earth and the defence of cultures.”  He expressed his gratitude for what they do to protect the planet and went on to lament that 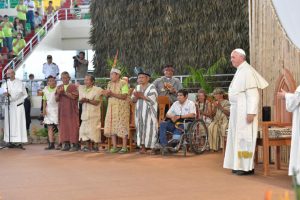 native Amazonian peoples have probably never been so threatened on their own lands as they are at present. The Pope had lunch with representatives of the peoples of Amazonia in the Pastoral Centre ‘Apaktone’.

Addressing a large crowd assembled at Jorge-Basadre-Institute in Puerto Maldonado in the afternoon, Francis pointed out that many people come to the area seeking a better life, sometimes “by the promising allure of gold mining,” But he warned that gold “can turn into a false god that demands human sacrifices. Pope Francis also raised the “painful subject” of human trafficking, which he said we should in reality call “slavery”.

After a brief visit to “Hogar Principito” Childrenʼs Home, Francis flew to Lima where he had a private meeting with members of the Society of Jesus in “San Pedro” Church that evening.

Before the Marian gathering, the Pope toured the Buenos Aires District, visited the city’s cathedral and addressed an assembly of priests, religious and seminarians Seminarians of the Ecclesiastical Provinces of Northern Peru in the “Colegio Seminario SS. Carlos y Marcelo. As is his practice, he stopped along the way to comfort the disabled, greet children and wave to a sea of smartphones taking pictures. 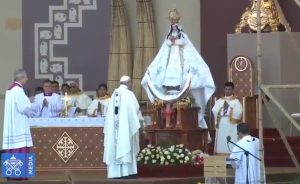 north of the country. He started the day by celebrating Mass at the waterfront esplanade of Huanchaco. “Jesus transforms, renews, & strengthens everything,’ Pope told Peruvians those present and reminded them that God always “extends his hand to us.”

Pope Francis ended his day in Trujillo at a joyful Marian celebration during which he declared – and crowned — the Immaculate Virgin of the Gate of Otuzco in Plaza de Armas ‘Mother of Mercy and Hope’. He assured the people of Peru that Mary is a mother who does not abandon her children. “She is a mother who knows the heart of her Peruvian children,” he said, adding “Every community, each tiny corner of this land, is accompanied by the face of a saint, and by love for Jesus Christ and for his Mother.”

Early on Sunday, at Lima’s Lord of the Miracles Shrine., the Pope met a group of contemplative Sisters who burst out laughing when Francis opened his address by joking that perhaps the sisters had used the event as an excuse to get a little fresh air.  But he quickly moved to a serious talk of encouragement for their vital role in the Church “The Church needs you,” was his  key message, and he encouraged the Sisters too, “Strive to grow in the fraternal life, so that every monastery can be a beacon of light in the midst of disunity and division.”

On his way to meet with the bishops, Pope Francs dropped in at the Cathedral of  Lima, where he prayed before relics of Peruvian Saints: “Help us to be a Church that goes forth, drawing near to all, especially the less fortunate.”

In a meeting with the Bishops in the Archbishop’s Palace, Francis called on Peru’s bishops to be builders of unity, citing the example of Saint Turibius of Mogrovejo, Archbishop of Lima, and Patron of Latin American Episcopate.

The Pope ended his visit to Peru by celebrating Mass at Las Palmas Air Base. “Jesus 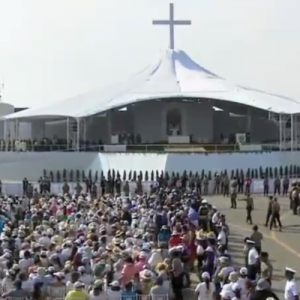 continues to walk on our streets,” he told the crowd. Recalling his consistent theme of the need to care for those on the fringes, Pope Francis called on the faithful to be a “timely antidote to the globalization of indifference”.

Before flying back to Rome, the Pope’s had a final message for Peru:“Dear Peruvian brothers and sisters, you have so many reasons for hope. I have seen this and have ‘touched’ it in these days. Protect your hope.  There is no better way to protect your hope than to remain united, so that these reasons for hope may grow day by day in your hearts.”

Pope Francis held his traditional inflight “press conference” with journalists onboard the papal plane touching on a wide range of issues – the fruits of the journey, its developments, and its difficulties.. He apologised for his choice of words when speaking about the sexual abuse scandals in Chile. He also spoke about the the couple of flight attendants he married on the flight.