The region of Benishangul-Gumuz lies in the far west of Ethiopia, on the border with Sudan, and is one of the poorest and most underdeveloped regions in the country. It has a population of almost 990,000, a little over one fifth of whom belong to the Gumuz ethnic group. Culturally, the Gumuz people are more closely related to the peoples of Sudan than to the other ethnic groups in Ethiopia. In the late 19th century and even into the first third of the 20th century many of the Gumuz fell victim to the slave traders. 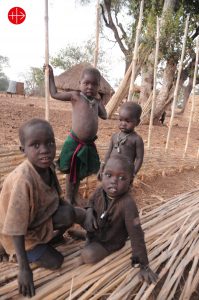 Most of the Gumuz people have until now, or until only very recently, never come into contact with Christianity. Their traditional religion has many different gods, including a river god, an earth god, a sun god, a tree god, a god of a particular mountain and many other gods besides. In reality, however, these are not so much gods as spirits or forces. There is a widespread belief in witchcraft, and many superstition-based traditions are practised, which cause great suffering. For example the pregnant Gumuz women are forced to leave their villages and give birth to their child alone in the woods, by a river or in the bush. They have to stay in this remote spot for at least three days, so if any complications occur, there is nobody to help them. But the people are convinced that the blood that flows in childbirth will bring a curse upon the family.

The Catholic priests and religious who have recently come to this region have been welcomed with great joy by the people, who are happy to hear about the Good News of the Gospel. At the same time their daily lives have improved, because the missionaries have brought with them medical care and set up schools for their children, and because they are also helping to overcome not only their worst physical sufferings but also their fears of evil spirits and witchcraft and the various traditions that bring them such suffering.

The Comboni missionaries have been working in the region for twelve years now and have established two mission stations so far. They now have four very well-established Catholic communities, but none of them as yet has a chapel. So the Comboni Fathers have turned to ACN for help so that they can build a small chapel in one of the villages where they can celebrate Holy Mass, give religious instruction and conduct other prayers and liturgical ceremonies.

Up till now all these things have to be done in the open air, exposed to all the elements, in scorching heat or torrential rainfall. A chapel would also strengthen the sense of community solidarity among the faithful and their sense of identification with the Church. At present the community has 120 already baptised Catholics, plus another 85 catechumens and 80 children. The local people have no money, needless to say, but are willing to contribute whatever they can in the form of locally available building materials, together with their own willing, if unskilled, labour. However, more durable materials will also be needed such as the steel for construction, and for this the Comboni missionaries have asked for help from ACN. The chapel will also need to be protected with an enclosure fence. ACN is proposing to help with a contribution of 20,000 Euros.