We hear about them in the news, in reports about successive boats that have sunk in the Mediterranean Sea. They come from a country where there is no war, and yet considered one of the worst places in which to be born and to live. Many risk much to get out. For us they are numbers – anonymous, ever-larger – that have long ceased to awaken any great emotions. Father Hagos Hadgu, project partner from ACN, knows many of their names and faces. 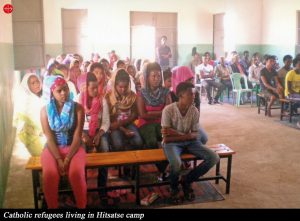 In 2015 about 50 thousand Eritreans reached Europe to become one of the largest national refugee groups, after the Syrians, Iraqis and Afghans in whose countries bloody wars are an everyday reality. Before they reach Europe, the USA or Canada, Eritreans pass through Ethiopia; one of Africa’s most hospitable countries, presently caring for about 800,000 refugees. Though some 10 million native people are starving here, they still continue to welcome those fleeing from neighbouring Sudan, Somalia and Eritrea. About 120,000 Eritreans have sought refuge in four camps located in northern Ethiopia’s Tigray region.

Ethiopian Camps receive 300 people every day. Many of the refugees are young, educated men, fleeing the prospect of endless military service. Fr Hadgu Hagos, a Catholic priest of the Ethiopian Rite who, together with Fr Ghiday Alema, visits refugee camps in Shimelba, Mai-Aini and Hitsatse every week, warns that refugees are ever more often minors and even unaccompanied children.

Hitsatse camp, surrounded by a mountainous desert, situated more than 70km from the nearest town, with its hundreds of simple brick barracks and shabby UNHCR tents, is home to many large multigenerational families. Humanitarian organizations work here, focusing on providing access to drinking water and food, children’s education, support for people with disabilities and women victims of abuse. There is also the spiritual dimension, which is why the camp has several chapels: Orthodox and Catholic, as well as a Muslim place of prayer. The camp numbers 25 thousand people, with a tiny Catholic community, though the camp at Shimelba – 128 km from Shire town – has over five thousand Catholics, better organised with youth groups and catechists. Fr Hagos and Fr Ghiday from the Adigrat Eparchy perform the sacraments and together with catechists, prepare those who request it to be baptised, catechize, visit families, and play ball with the young.

“People having suffered psychological deprivation, need consolation, reconciliation, you have to care for them, work with them. You have to tell them about God” – explains Fr Hagos, as he opens a modest chapel in the camp; accompanied by an old dried out man in oversized glasses, who explains that though he worked at the American Embassy in Asmara, he has been waiting for a visa for over three years. Yet he remains hopeful and confident that he will soon be able to fly there with his wife. He adds that they could not have survived all this, without their faith. “We left everything behind, but we came here with our Catholic faith. And thanks to the camp chapel we can continue to express it” – and continues –“There are no Catholics in the surrounding area, when people come here and see the chapel, they are filled with hope. We gather around this church, and thereby also express our gratitude to Aid to the Church in Need (ACN), for building it.”

Eritrean Christians need to have strong faith. Fr Hagos explains that these persecutions and illegal border crossings leave people traumatised. They have to sell all they have to pay the soldiers at the checkpoints. When they reach the camps, they have almost nothing to survive on. A sense of hopelessness, frustration and depression is common, aggravated by separation from family, longing, idleness, and an uncertain future. The consequences are often drug and alcohol addiction, and suicide.

“If they fail to earn money to pay the smugglers and leave, life in the camp ceases to have any sense for them. They begin to hate themselves. I saw a girl who set fire to herself in the camp”, recalls Fr Hagos. “They can’t stand the tension. But they rarely talk what they have experienced in the camp and on the road.”

The majority do not intend to stay in Ethiopia, faced with drought and famine, with no prospects for work and a normal life. The legal road involves waiting for a visa to Europe, the USA or Canada. Four families a week receive them. But the queue is nearly equally long as the wait, from 3 to 7 years. Older people, unable to face the challenge and hardships of the journey, have to wait to be relocated, and are more often than not left to their own devices. Young people on the other, impatient and not prepared to waste the best years of their lives, undertake the risky journey through desert and the Mediterranean Sea. Illegal routes to Europe lead through Sudan, Egypt, Libya and the Italian island of Lampedusa.

“The young move me”, declares Fr Hagos “they often wait, sometimes for years, without any certainty about their future. They dream of a better life. We try to convince them against choosing the illegal option, but if they are desperate they decide to go and risk it. Sometimes someone disappears, only for us to learn, several months later, that the boys with whom we played football, who served at the altar, had drowned in the Mediterranean Sea. One day, we lost 16 such boys. Their relatives cried, and I cried with them. One of them was Tadese, a bright and capable young lad, a conscientious student, who encouraged other young people to get involved with the Church. We liked to joke together… He drowned in the Mediterranean Sea last year. I can still see his face…”

Before ACN carried out the construction of the chapel to cover spiritual and psychosocial needs of the Catholic refugees living in Hitsatse camp, the community was celebrating Holy Mass under the trees. In 2015 the pontifical foundation supported projects in Ethiopia with more than 2,3 million Euro.