You have recently been in Eritrea. What is your impression about this country?

It was the first time for me, after so many years of trying I got finally the permission to go to Eritrea. Nearly 50% of the population is Christian; the other half is Muslim. The majority of Christians belong to the Orthodox Church. Catholic, Orthodox and Protestant Churches as well Islam are recognized by the state. There are around 150,000 Catholics over there. Definitely you could say that Eritrea is a country which was very much touched by Christianity. The country is marked by Christianity; there are impressive and beautiful churches, impressive towers. But also the spirituality of the people is impressive. They are showing it in their faces and in the clothes that they wear too. You can see women wearing white clothes, which symbolizes the attachment to spirituality, as they bring heaven into mind. Also, even these clothes somehow bring a spiritual atmosphere.

How is life for the Christians there?

Despite all the difficulties that they have and that are widely known, we could say that Christianity is surviving in these demanding times. It is worth noting that the Catholic Church is somehow holding onto her self-sufficiency; she is trying to be self-reliant and run social projects. The Catholic Church is the only religious organization in the country taking care of kindergartens, schools…it is also giving different types of support for women’s promotion, equipping them with some tools to be self-reliant.This is a very remarkable work of the Church because – as everybody knows – many middle-aged men are in the army and for this reason the woman has to take care of the usually large family. We have many families supported only by women practically. The Catholic Church is recognizing this need and is trying to address this problem by thorough courses on hygiene, cooking, embroidering, sewing and so on. 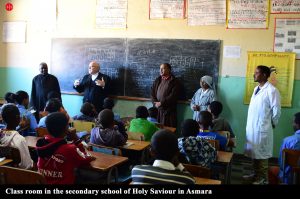 What were the most touching moments of the trip?

They were many touching moments. If I have to choose one, for me as a priest it was the great determination of the young people – priests and sisters- to learn. Since the internet speed is not high, they have to stay until very late in the night, well after midnight, in order to do their homework, to download files and to prepare their papers for the next day. I saw them working for long, long hours and studying in the night in order to get their licentiate. This is amazing and the same http://forhealthylives.com goes to the Sisters. It’s good to see how many people are interested in being a catechist, in teaching religion. It is not only for them a source of income, a salary,but it is a vocation that they feel.

As it is well known, the priest cannot celebrate Mass everywhere and because of this the Sisters are taking care of the parishes. They are preparing people for first communion; they are taking care of the sick. I remember one old man who was coming to them and he seems to be so familiar with the Sisters. He was treated like a grandfather. He was an albino. It was clear that he was sick and had other difficulties, but he felt completely at home with them, which means that they are very close to the people.

It was also very touching to see the Sisters running the orphanage. It was beautiful to see how the Sisters were treated by the younger and older girls; it was really very nice to see them dancing, teaching and so on.

Another image in my head is an old father who was nearly blind. He was running an orphanage and he was brought by a handicapped man, as the house was for  orphans and also for handicapped people. And you can sense that these houses are not institutions but a kind of family that is something that is very close to their hearts. 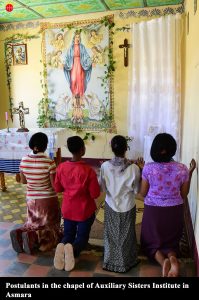 What is the most important point for ACN’s work now?

Eritrea hungers for God. I can say this: their determination and spirituality, their hunger for Bibles, this is what is really amazing. They told me people will read anything related to religion. They would like to have it. It’s not easy to get it, but when they have it, they will buy it, even if it is very expensive for them.There are many vocations, both for priesthood and religious life.  When I was in the minor Seminary I was asking the boys, ‘why do you want to become a priest?’, and the answers were beautiful. Different answers but beautiful: “I want to serve God”, “I want to lead the people”or “I love God and I would like that the others will love God as well”. Of course not all of them will become priests, because sometimes they are alone in deciding;they may be the only son of the family and their parents don’t like it; some of them go into military service and they are not allowed to leave… there are some obstacles as well, but the answers were beautiful.