“A Drop of Milk” appeal

Urgent request to help the children of Aleppo

Since the start of the conflict, ACN has been channeling urgent help for Christians in Syria. We are now working with our local partners who support the Christian families of Syria to  address a very urgent issue: ensuring distribution of milk to malnourished children in Aleppo. 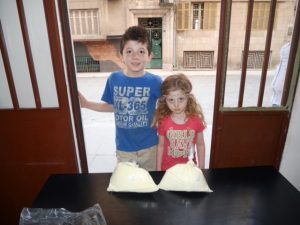 “We distribute milk every month to about 2 850 children: 2 600 receive powdered milk and 250 babies not breastfed by their mother receive a special infant’s milk. The total number of beneficiaries varies every month depending on the number of births and emigration of the families” explains Dr. Nabil Antaki, the Syrian-American doctor who is coordinating the project.

Georgina, a mother of three children, explains to ACN how important the Drop of Milk project is for her and her family: “Myriam is ten years old; Pamela is six. We are one of the beneficiaries of ‘A Drop of Milk’ project. Both Myriam and Pamela get one kilogram of milk powder every month. Pamela’s health is critical after being hit by bomb which left shrapnel in her back.   Now that she is recovering, she needs milk to become healthie and stronger. This project is very important for me and my family and I’d really like it to continue.”The milk project is entirely funded by charitable organisations… and the money is running out. Dr Antaki, has approached ACN for support to be able to keep running the milk program. We have assured Dr. Antaki that we will help provide milk for the children of Aleppo.

The children of Aleppo, already deprived of a normal and peaceful childhood, should not be deprived of milk needed for their growth and health.

Will you partner with us and show the children of Aleppo that there is hope? 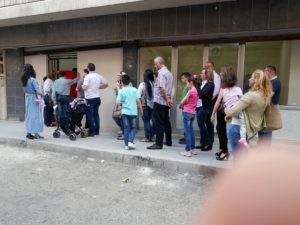 The situation is dire…

Despite the end of the conflict in that region, these staggering numbers tell a story of ongoing despair:  80% of the population of Aleppo is displaced; 70% live below the poverty line.  Food parcels are desperately needed to fend-off the starvation that comes with such devastation.

The relative calm since the retaking of Eastern Aleppo has seen families returning to their homes.   But with the vast amount of destruction and lack of infrastructure, their needs are huge.   Even basics like food baskets, fuel for heating their houses and electricity are  needed so they can begin again. Since the start of the conflict, the pontifical charity ACN (Aid to the Church in Need) has been channeling urgent help to those Christian families in Syria.

In the name of Aleppo’s children: We thank you!