Already one of the poorest and most underdeveloped countries in the world, the Democratic Republic of Congo has been thrown still further into destitution and chaos by the continuing violence and armed conflict in the country. The lack of security and the political instability have left the ordinary people poorer than ever. Many parents are finding themselves unable to care for their children, and many children are being abandoned or even thrown out – often on the pretext of having practised witchcraft and brought evil on the family. Not surprisingly, many boys go off the rails and end up in criminal gangs, while girls are forced into prostitution or become pregnant and have no one to help them. These young girls are still less able to care for their children, because they have had no education and have no idea how to support themselves except through prostitution. 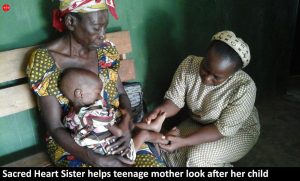 The sisters of the congregation of the Filles de Notre Dame du Sacré Cœur (Sisters of Our Lady of the Sacred Heart) are caring for these helpless people, in four separate centres around the country. They care for the street children and orphans and help the teenage m others by teaching them knitting and sewing, so that they can support themselves. They teach basic literacy, care for the elderly, tend leprosy patients in the leprosy centres, provide medical and midwifery care for expectant mothers and care for the sick who would otherwise have no access to medical treatment. They also teach in the schools and work in the parishes, supporting the priests by providing catechetical instruction, for example.

Now they are planning to build a new centre, in Mbandaka, in the north-west of the country, where they will care above all for orphans and for the sick. ACN has already promised 80,000 Euros in support of their project.