CONGO  – Interview – “Mystery of faith in a broken land”

Between 16t – 29August 2016 a delegation from the international Catholic Charity Aid to the Church in Need travelled to the Democratic Republic of the Congo. The reason of the trip was to see what were the most urgent needs in Kivu, Eastern side of the country, which is a priority region for ACN in DRC.

How does the situation look like in the Democratic Republic of the Congo right now?

Regina Lynch, Director of ACN’s Project Department: For the past 20 years it has been a place of war “on and off”. According to the International Red Cross about 5.4 million people have died in the wars or from the consequences of them. The problem is that few people are aware of what is happening there, nobody really speaks about it. There has been no or very little development of the region. In some places they are even going backwards. For example, roads that were once in a good condition now require twice as long to be travelled. In 2012 Congo had the lowest rate of human development index of the United Nations.

Which experiences during your trip to DRC saddened you the most?

Fr Martin Barta, ACN International’s Ecclesiastical Assistant: There is a very low sense of security, people are afraid to go out to the countryside, you usually can’t drive out of the city after 6 o’clock because you risk to be attacked or kidnapped by various armed groups.  Even in the city there is always the danger of being high-jacked or simply shot, as we heard from people, who lived there.

Regina Lynch: Because of kidnappings, we were also discouraged in the Goma region to go outside the city. Specially being foreigners we were considered potential targets. In the last 9 years 7 priests have been killed. So the question of violence and insecurity dominates every conversation. 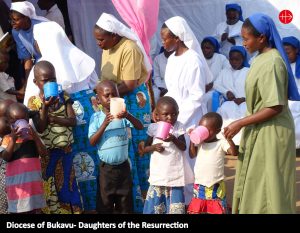 Which experiences during your trip to DRC were the most beautiful ones?

Regina Lynch: One of the beautiful experiences for me was the Golden Jubilee celebration of the Daughters of Resurrection in Bukavu. What they have done in 50 years, to see how much they are appreciated by the local population, they are really very close to the poorest of the poor. At the same time they are very active pastoraly, they are very good at doing catechetical work. It is very nice to see how the group of some simple girls grew into a congregation of 216 sisters, who despite the difficult times they have been through and the violence against them, are very motivated.

Fr Martin Barta: For me it was the mystery of faith. To see how dangerous it is for the missionaries but also for the people to live in certain parts of this region and how they go through difficulties without despairing. How the people can deal with circumstances in which people in the Western World would be completely broken, they wouldn’t bear it… People there tend to speak about their pain and sorrows with sense of composure, we never saw anybody crying. But seeing them praying and dancing during the Holy Mass, it was as if they put all their great emotional distress into it… This expression of faith, which overcomes these unhuman conditions, was very strong for me.

Another amazing experience for both of us was in Goma. There is a prison which was built at the time of the Belgian colony. It is about 70 years old and was built for 150 people. Now there are more than 2,000.  Sister Kathrin from the German Institute of St. Bonifatius, who visits the prison couple of times a week, took us there with her. We didn’t imagine what it was going to be like. The guards let us enter and suddenly we realized we were inside the prison. There were no cells, no barriers; we were literally in the middle of the prison.  And the sister was walking like an innocent lamb among the prisoners, without any apparent concern for the danger of her situation. The way the sister treated the prisoners and her natural authority impressed me a lot. How the sister’s dedication can have such an influence on those men who respect her so much. She was a nurse treating wounds and brought food to the prisoners. Sister Kathrin is also trying to get out of this prison those people who spent many years there without being ever accused of anything.

Fr Martin Barta: We visited the Trappist sisters in Murhesa near Bukavu. They are a contemplative order and it is amazing to see contemplative life in the middle of this violent area. The nuns are in constant danger. One was killed in 2009, she was shot upon opening the door of the monastery. But they remain there praying for the whole region and asking for the blessing of peace. There is one 90-year-old French sister – there are only two left, the rest are Congolese. We asked her what was their charisma and she replied: “To search for God in simplicity and love, at any time”.

Regina Lynch: We also asked one of the priests in Goma, Fr Juvenal, who is working in the so-called red zone, one of the most dangerous ones, why did the people stay there? And he says “People say we stay because the priest is still there.” That is probably typical for the whole region. And it doesn’t only refer to the priests but also the sisters. In fact the people stay as long as the Church in the form of the Church personnel is there. That is the reason for the people to stay.  The Church gives them God and where God is, there is hope and light in the darkness.

What kind of projects does ACN support in DRC at the moment?

Regina Lynch: In Eastern part of DRC we help, among other things, to build priests’ houses and churches and in formation of the clergy. In the Bukavu region we had a number of reconstruction projects because of the earthquakes in 2005 and 2008. We also give existence help for sisters, in particular Daughters of the Resurrection. Those sisters were on their way to be much more self-sufficient and then with the violence spreading in the region they were forced to close 7 of their houses, some sisters were killed. Another important project is the support of the yearly retreats for the priests, because the psychological pressure on them is really high. We also give the Mass stipends and help the family apostolate which is very strong there.