Violence has erupted once again in the Central African Republic. In response the United Nations plans to deploy additional peacekeeping forces in the Central African Republic diamond-mining town of Bangassou to “neutralize attackers, protect civilians and facilitate critical humanitarian support to the population.” Almost three quarters of the 35,000 inhabitants of the southeastern town need humanitarian assistance following the unrest. 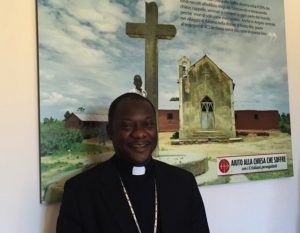 The latest in a series of attacks was an incident in Bangassou, in which armed men used heavy weapons to attack the base of the UN mission in CAR, known by its French acronym MINUSCA, and humanitarian personnel. The armed men also attacked the Muslim neighbourhood of Tokoyo where numerous civilians were killed and others wounded. The Security Council issued a statement to the press, strongly condemning the violence by anti-Balaka elements in Bangassou on 13 and 14 May. The 15-member body reiterated that “attacks against peacekeepers may constitute war crimes and reminded all parties of their obligations under international humanitarian law.”

Other clashes erupted in the southern prefectures of Bria and Alindao. In Bria, about 1,000 people near the UN mission’s base were displaced, while more than 500 sought refuge at a UN Office of Coordination of Humanitarian Assistance compound. In Alindao, up to 8,500 people have been displaced by clashes. Unverified figures indicate that up to 100 people may have been killed said Stephane Dujarric, spokesman for UN Secretary-General Antonio Guterres.

Pope Francis offered his prayer and support for victims of the latest violence in the Central African Republic, repeating his frequent call for the use of dialogue, rather than weapons, to solve conflicts. “Painful news unfortunately comes from the Central African Republic, which I carry in my heart, especially after my visit in November 2015,” the Pope said noting that recent clashes “have caused numerous victims and displaced, and threaten the process of peace.”  He voiced his closeness to the people, the bishops, and to “all those who work for the good of the people and for peaceful coexistence” in the CAR. Francis then prayed for the deceased and the wounded before renewing his appeal that “weapons be silenced and the good will of dialogue prevail in order to give peace and development to the country.”

Aid to the Church in Need received an account of the violence in his diocese and a plea for help from Bishop Cy Nastor of Alindao.

Here is his original email (translated from French):

Today, I setting aside time to give news of Alindao to all the friends of Alindao.

Since Monday 8 May, hostilities have begun between the group of Selba Pele of Ali Darass and a group of Balaka (a group of young people who have revolted because of the deplorable actions of the Selka). This started after kidnappings and murders of some young Ngbougou of Datoko village by these Selkas.

This is what happened.The fight started on Monday around 4:30 pm and lasted two days. Fortunately, the peacekeepers arrived to secure the displaced population in the Catholic Mission. For nearly two days the situation has been calm, but the displaced continue to fill the site of the Catholic Mission – over 5000 people. The catechetical centre, the bishop’s palace, the presbytery, the reception centre, the school and the Sisters’ convent are all full. We are starting to have a serious accommodation problem. So far, no NGO has come to our rescue. Already there is a problem with water and food. We are organizing people on the site to improve conditions for all.

I managed to meet Ali Darass, the rebel leader of the UPC, twice in a row to discuss with him and find ways out of this crisis. We will continue our efforts to restore peace and security in the city.

The abbots present were mobilized to welcome the population and help them find a place to rest. Abbé Séverin is responsible for providing regular updates on the Internet to inform international opinion, the authorities of Bangui, our friends and those who know the diocese of Alindao.

That is basically our current situation. We rely on your prayers and your moral support.

Investigations by MINUSCA’s Human Rights Division suggest that between March and May 2017 more than 121 civilians and six peacekeepers were killed, excluding figures in the latest incidents.