The diocese of Maroua-Mokolo is situated in the north of Cameroon on the frontier region with Nigeria. Again and again it has suffered from attacks by the Islamist terrorist group Boko Haram. It is of course true that the armed, military-style attacks by the terrorists have diminished in the region, since Boko Haram has now been seriously weakened by the joint military action of troops from Nigeria, Cameroon, Niger and Chad. However, the number of suicide bomb attacks has increased instead. Often it is young people, even girls, who deliberately blow themselves up in crowded places taking many others with them to their deaths. 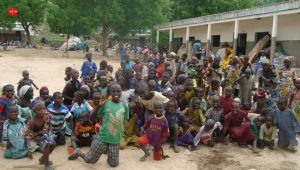 Bishop Bruno Ateba Edo of Maroua-Mokolo reports that people have begun to develop a sort of psychosis, knowing that such an attack could happen at any time in any place. So far, thank God, the churches have not yet become the target of these attacks, but nonetheless volunteer helpers are now checking all those entering the churches for guns and explosives. Large handbags are forbidden and in smaller communities, where there is no church and people still attend Mass under a tree, the faithful join hands and form a human chain in order to prevent any outside attacker from mingling unnoticed among the congregation.

The fear is greatest in the marketplaces, since this is where the attacks tend to happen most frequently. On 19 February 2016 there was a particularly serious suicide attack in the marketplace in the small town of Mémé. Two suicide attackers blew themselves up, killing 20 other bystanders at the same time and injuring dozens more. A number of the women market traders and others attending the market were fortunate that day, since when the bomb went off they had just gone into the church in order to take part in the Stations of the Cross. Recalling those events today they maintain: “We are still alive because we were in the church. Had it not been for the Stations of the Cross, we too would have been killed.“

Bishop Bruno appealed to ACN for help, so that the Catholic parish in Mémè can provide comfort and support for the families of the victims and for the others injured in the attack. We were happy to be able to give 7,000 Euros in aid for this purpose.