Following the murder of over twenty people in an attack in Bourasso, in the northeast of Burkina Faso, Aid to the Church in Need is calling attention to a severe deterioration of the situation in the Diocese of FadaN’Gourma, in the eastern part of the west-African country, over the past six months. Five parishes had to be completely closed, and, because of the danger of terrorist attacks, priests are only able to minister to 5% of the villages in those that remain open. The minor seminary of San Kisito had to be moved to FadaN’Gourma, the regional capital.

According to a report sent by the diocese, at the request of international charity Aid to the Church in Need (ACN), robberies, kidnappings and murders have all increased significantly in FadaN’Gourma in 2022. Five of the sixteen parishes in the diocese have been directly targeted by violent attacks and have had to close for security reasons.

In another seven parishes, services are limited to the main church, because most of the roads are blocked by the terrorists, who control a majority of land routes and have destroyed telephone communication networks, making it impossible for priests to travel or get in touch with people from the villages they serve. In the remaining four parishes freedom of movement is very limited.

The cause for this state of affairs is the Islamist insurgency that has swept the country since 2015, and which continues to increase its reach. At first the Jihadists did not seem to be preoccupied with the Christian presence, but that changed in 2019. 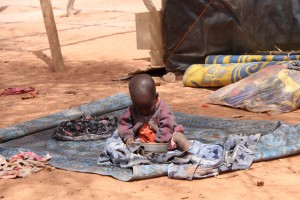 Since the crisis began, communities have been subjected to violence, murders and all types of abuse. Many people have been kidnapped. Some were freed after questioning, others remain in captivity and yet others were murdered, says the report. Large-scale cattle theft has become an everyday occurrence. All this causes panic among the population and leads many to flee, reducing communities to ghost-towns.

How do the Jihadists operate?

The report quotes a local priest who describes how the terrorists operate. On 28 February 2022, the town hall and the police station in the town of Tambaga, in the eastern part of the diocese, were burned to the ground. For a few days the terrorists surrounded the market and took over the streets. The inhabitants of the town were taken to the mosque and asked to convert to Islam: “Issa (Jesus) has come, but his mission is over. He promised he would be followed by a successor, and that successor is Mohammed”, the terrorists announced.“They then burnt down the local Catholic school, the public school and a private school”, says the priest, who managed to escape a few days later.

In many parts of the diocese Islamist sermons have become regular and any other religious practice is forbidden. In others, Catholic services are still permitted, but militants often enter the chapels to ensure that men and women sit on different benches.

When the crisis began, it looked as if the northern part of the diocese would be safe. However, the terrorists made very quick progress in the area over the past few months. 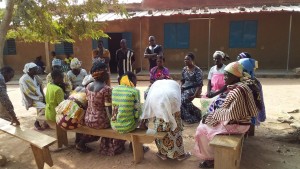 Despite the terrible situation the Christians find themselves in, their religious enthusiasm remains strong. Many people have fled their villages and taken refuge in Matiakoali, where troops are based. Without priests, the laity have taken charge. Every Sunday the parish church fills with Christians who came to Matiakoali seeking safety. Christians from nearby villages, where it is more dangerous to gather, try to make the trip occasionally, to take part in common worship. During Easter celebrations the chancellor of the diocese was flown in by helicopter to baptise 32 adults and confirm 34.

ACN continues to support the local church with various projects all over the country. Over the past few weeks, the foundation sent a sum for Mass stipends for the 58 priests in the Diocese of FadaN’Gourma, many of whom have lost their parishes to jihadist terror. Radio is now in many places the only means the pastoral agents have to remain in touch with the Catholic faithful, and ACN is helping to urgently reinforce the available network.