‘Without education Syrian children will be the next generation of IS’

Bearing samples of drawing and messages gathered from 1.2 million Muslim and Christian children from schools in Homs, Aleppo and Damascus, Syria, an appeal for peace was brought by representatives of the three main churches in Syria to policymakers at the highest levels of the EU and UN institutions. 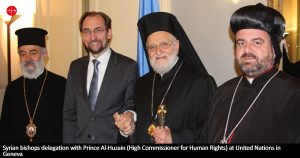 Organized by the Catholic charity Aid to the Church in Need (ACN), the delegation visit, representing 95% of all Christians in Syria, was led by the Melkite Greek Catholic Patriarch Gregorius III Laham of Antioch and all the East and Alexandria and Jerusalem, Metropolitan Georgis Abou-Zakhem of the Antioch Greek Orthodox Archdiocese of Homs, and Metropolitan Selwanos Boutros Alnemeh of the Syriac Orthodox Archdiocese of Homs and Hama, Syria.

Fourteen meetings were held at the EU institutions in Brussels including discussions with Jan Figel the EU Special Representative for Freedom of Religion, Christos Stylianides the Commissioner for Humanitarian and Emergency Aid, Federica Mogherini the EU High Representative for External Relations and Security, the President of the European Parliament Martin Schulz, and President of the European Commission Jean-Claude Juncker.

Encouraging EU policy makers to press the international community for security and stability in Syria, Patriarch Gregorios III stated: “Peace in Syria will come only if everyone does his part. The international community has to sit down again and achieve security and stability. Peace, however, cannot be imposed, it must come from inside, from the hearts of each one of us – and that has and continues to be the work of the Churches, every day”.

European Parliament President Martin Schulz stated: “The circumstances are dramatic and your timely visit allows us to underline our solidarity and our respect for your tireless efforts to seek peace. Know that your meetings have been greatly discussed by our colleagues and that it is extremely important to know the situation on the ground”.

“The role of the Christians in Syria is important not only because of the past but also for the future”, said Metropolitan Georgis Abou-Zakhem. “Christians are uniquely trusted; we are in some ways the glue in the Syrian society enabling dialogue and reconciliation in a country in which we have lived together for over 14 centuries”. Citing several examples of this Muslim-Christian dialogue of life in Homs, where he has lived since before the beginning of the conflict, Bishop Georgis demonstrated that the different communities of Muslims and the Christians know how to get along: “With security and stability, social life picks up again rapidly as we witness with the people who are coming back to Homs. We are helping both Muslims and Christians integrate back into the villages”.

This was echoed by Metropolitan Selwanos of Homs explaining how Christians living throughout the country serve as a guarantee that Syria will not be divided into sectarian provinces. “We are rebuilding schools and they are open for everyone; more than 90% of the students are Muslim because they believe in the quality of our education and like this the new generation learns to live together.”

The delegation then moved from Brussels to Geneva bringing the children’s messages to the UN High Commissioner for Refugees, Filippo Grandi and the High Commissioner for Human Rights, Prince Zaaid Al-Hussain, seeking concrete ways to cooperate with their respective UN delegates inside Syria.

“The Churches are, in some areas where other international NGO’s have withdrawn due to security risks, one of the few remaining structures effective in helping the humanitarian needs,” said ACN Middle East Project Director Fr. Andrzej Halemba. The Churches are already helping families of internally displaced persons returning to their destroyed homes, for example in Qusayr, to buy construction and repair materials with which to start to rebuild. Filippo Grandi stated: “The UN needs the Churches as messengers of peace, because they speak for everyone.”

“A generation without school is a lost generation capable of joining ISIS out of despair. We are not politicians, our part is to rekindle the soul of a multicultural Syrian society”, explained Patriarch Gregorios III, “we are confident that with enough stability and security allowing children to go to school we are cementing a peaceful future for Syria.”