101 year old Doña Penha had seen and experienced many things but the latest event is probably one of the most significant in her long life. She received her First Communion during Mass at Our Lady of Mount Carmel nursing home in Rio de Janeiro, Brazil – probably the oldest person in the world to do so. 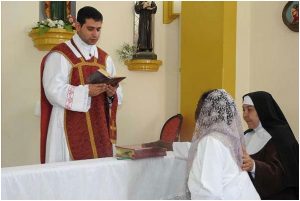 A year ago Doña Penha arrived at the nursing home, which is run by the Sisters of the Our Lady of the Rosary of Fatima Association. The home has a chapel where Mass is celebrated during the week and Doña Penha began to attend Mass with the other residents.
When she eventually asked to go to Confession, the priest realised she had not yet received Communion. Fr Domingos Sávio Silva Ferreira therefore asked the sisters to prepare Doña Penha to receive the sacrament.

Having completed the preparation, Doña Penha received Communion for the first time. Nursing home staff who were present could see that “that was what she really wanted.” They observed that even at 101 years of age “she is very lucid, and prepared to receive First Communion from the heart.”

Those who witnessed the occasion said it was a great testimony to the love of God. Josiane Ribeiro, the administrative assistant of the nursing home, stated “It was a very beautiful moment that showed us that it is never too late to receive the Eucharist, which for someone seeking God, neither time nor shame can prevent.”